Juhu airport to get a runway over the sea[older news:-sealink from bandra to versova] another example of confused planning

Juhu airport to get a runway over the sea 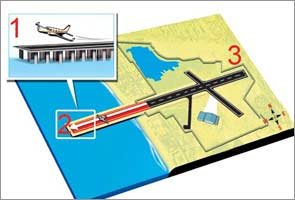 Mumbai: With the initiative to develop Juhu airport, as a secondary airport gaining momentum, and plans to shift all of the small aircraft operations from Mumbai airport to Juhu on the anvil, it has now been decided that the existing runway will be extended westwards into the Arabian Sea - on stilts.

The aviation ministry's decision aims to reduce the burden from the only international airport in the city. Civil aviation minister Ajit Singh said, "The increasing flight congestion at Mumbai airport is a concern for us, and we have decided to develop the Juhu airport so that it can take some load off the international airport. We want to shift the small aircraft operations to Juhu. A task force has been structured under the chairmanship of the Maharashtra CM, which will pursue the matter further. One joint secretary-level officer from the civil aviation ministry is also a member of this task force, and is coordinating with the state for necessary clearances."

When the minister was asked about the encroachments and was also informed that the runway of this airport is too small to cater to small aircraft like ATRs, he said, "The task force is studying important aspects including encroachments. The suggestion given by the consultancy firm to extend the Juhu airport runway into Arabian Sea also looks feasible. The existing runway will be extended by constructing stilts into the Arabian Sea." Singh also maintained that once necessary clearances are obtained, construction work would be on a fast track.

During a visit to the city last month, Singh along with the CM had conducted an aerial survey of Juhu airport, and later during a press briefing had announced that the airport would be developed. M Yadagiri, director, Juhu airport, also confirmed that the idea to extend the runway into Arabian Sea was once discussed with the cabinet secretary of Maharashtra. "It was mulled during a meeting with the state cabinet secretary to extend the runway into the Arabian Sea. I would not be able to comment whether it has finally been adopted or not, as it is a matter where the decision will be taken by the top officials."

Sources from Airport Authority of India (AAI), confirmed that movement of top officials from Delhi to Juhu has increased in the past few months. A team from the AAI planning department was on a three-day visit to Juhu to chalk out a strategy to clear the encroachments to pave the way for the new runway.

"Yes, the team was in Mumbai to study various aspects associated with Juhu airport, and encroachment could be one of the aspect," said Yadagiri.

Extended lengthJuhu's runway 08/26 lies in the east-west direction, and is currently 1,143m long, and will be extended by 877 metres to 2,020 metres by building it on stilts over the Juhu-Tara Road and into the Arabian Sea. Presently, the runway caters to a large number of chopper operations and a few number of fixed-wing small aircraft operate from here. According to the aviation ministry sources, around 100 flight operations (small aircraft), including ATRs, would be shifted to this runway, when it becomes operational.

Shifting encroachers
40 Acres of Juhu airport, which has an approximate area of 400 acres, is encroached by slums. The aviation authorities along with the state authorities are chalking out a strategy to relocate over 3,000 hutments from the encroached area, so that the development process can start.

The Juhu runway extension plan was proposed to start in 2010, but the Ministry of Environment and Forests (MoEF) did not give its NOC then. However, in 2011, with Coastal Regulation Zone (CRZ) rules permitting roads on stilts in CRZ-I areas (within 100 metres of the shoreline), the project looks all set to take off.

Clara Lewis, TNN Aug 27, 2011, 01.11am IST
MUMBAI: The Bandra-Versova sea link on Friday received the go-ahead from the Maharashtra Coastal Zone Management Authority (MCZMA). The authority also approved the offsite infrastructure for the Navi Mumbai international airport. Both the projects have been approved under the new Coastal Regulation Zone norms of 2011, said T C Benjamin, principal secretary, urban development.
The MCZMA will now write to the Union environment ministry to allow the construction of the two projects, said Valsa Nair-Singh, secretary, environment. The go-ahead from the MCZMA is considered a virtual green signal from the Union environment ministry as well

First Published: 01:43 IST(30/12/2011)
Last Updated: 01:44 IST(30/12/2011)
Even as the state-appointed joint technical committee on coastal roads is slated to submit its report this week, the government has firmed up its decision to construct a sea link from Bandra to Versova.

A government resolution issued on Thursday by the Public Works Department(Maharashtra State Road Development Corporation) said that the decision to construct a 10 km sea bridge 900 metres into the sea, from Bandra to Versova, had been finalised after considering four options. This alignment of the sea link had been recommended by MSRDC-appointed consultants Parsons Brinckerhoff, which carried out a feasibility study.
The GR states that the consultants recommended the sea link option after looking at preliminary cost estimates, environmental concerns and the new Coastal Regulatory Zone notification 2011.
This alignment has also got a go-ahead from the MSRDC board and was under consideration by the state. The state government, after consultations with the planning department and approval of the finance department, has now cleared this alignment.
The 8-lane link, which will run from Bandra to Versova, will have two connectors/inlets for vehicles at Carter Road junction (near Otters Club) and at Juhu Koliwada.
The sea link has got a green nod from the state coastal body and has been awaiting clearance from the Ministry of Environment and Forests (MoEF). "If we opt for mixed alignment or coastal road, we will have to struggle for clearances. MoEF is unlikely to clear the coastal road in a jiffy. In that time, the sea link project can take off," said a senior official, who did not wish to be named. There have been consistent flip-flops in the government in the last year on whether the Western Freeway project, aimed at linking south Mumbai to the western suburbs, should be a sea link or a coastal road.
Chief Minister Prithviraj Chavan, who has been keen on a coastal road as it is cost effective, had set up a committee led by municipal commissioner Subodh Kumar to carry out a techno-feasibility report on the project. The report is likely to be submitted this week. This has already delayed the proposed Worli-Haji Ali sea link. MUMBAI: The Central Bureau of Investigation (CBI) has started a preliminary probe into a scam pertaining to Juhu airport, wherein senior Airports Authority of India (AAI) officials had waived tens of crores of rupees payable by builders who were given permission to increase the height of buildings in the vicinity.

In a letter to the AAI chief vigilance officer, the CBI has sought certified copies of files pertaining to the Juhu aerodrome licencing and has asked three AAI officials, who the agency is probing, to report to its office in Colaba. "J M S Negi, former AAI executive director, V K Dutta, AAI executive director and S K Dasgupta, DGM, NOC have been called for the probe,'' said a source.

Dutta confirmed that the CBI has called them for a probe and he will report to the office on Saturday. He said that the investigation was not about building height, but about a Juhu airport aeronautical study. Negi will report on Friday.

TOI had reported (January 12) about a cash-strapped AAI losing tens of crores as it charged builders a pittance, or nothing at all, for granting permission to increase the height of projects in the vicinity of Juhu airport. Initially AAI dropped the fees from Rs25 lakh to Rs 2lakh and then did away with the levy for projects within 20km of the airport. The main area where norms were flouted was within 2.5km of the airport, where AAI allowed buildings to rise to 56.27 metres above mean sea level (AMSL), even though the upper limit for safe flight operations is 49.87m AMSL. Juhu airport was the only one in the country for which AAI did not levy a fee.

www.dnaindia.com › Mumbai‎
May 14, 2013 - Juhu airport which is located in near the Arabian sea demands a high real estate price. - Mumbai - dna.

www.dnaindia.com › Mumbai‎
Fifty years ago, the Juhu airport was declared a green zone in spite of it being home to India's first civil aviation airport. - Mumbai - dna.