He was a great Indian shipbuilder and was the master-builder at Bombay Dockyard from 1792 to 1821, a post he shared with his cousin Framji Manackjee until the latter's death in 1804. Although their work had been praised by successive British commanders-in-chief in India, from Admiral Sir Edward Hughes in 1781 onwards, the seal was set on Jamsetjee Bomanjee's work when he laid down
the 'Minden'. This was the first ship of the line to be built for the Royal Navy out of England.


Like all the Bombay ships she was built of teak and very strong and durable. On her delivery to England their Lordships of the Admiralty sent Bomanjee a letter of appreciation and a piece of plate.

The one ship that the Wadias built and of most historic significance for Parsis is the H.M.S. Minden.
The Bombay Courier, June 23, 1810 wrote:

“On Tuesday last His Majesty’s Ship, the “Minden” built in the new docks (Bombay) by Jamshedji Bomanji Wadia was floated into the stream at high water, after the usual ceremony of breaking the bottle had been performed by the Honorable Governor Jonathan Duncan.

In having produced the “Minden”, Bombay is entitled to the distinguished praise of providing the first and only British ship of the line built out of the limits of the Mother Country; and in the opinion of very competent judges, the “Minden”, for beauty of construction and strength of frame, may stand in competition with any man-o-war that has come out of the most celebrated Dockyards of Great Britain. For the skill of its architects, for the superiority of its timber, and for the excellence of its docks, Bombay may now claim a distinguished place among naval arsenals”.

A young American lawyer, Francis Scott Key was sent on board the British ship “Minden”, in Chesapeake Bay to negotiate the release of a friend who had been captured after the defeat of the US forces in Maryland. Key was detained on the ship overnight while the British attacked Baltimore. “At the dawn’s early light” amidst the “rockets’ red glare”, he saw the American flag still flying high over Fort McHenry which inspired him to hurriedly scribble on an envelope a poem, that was to become :- 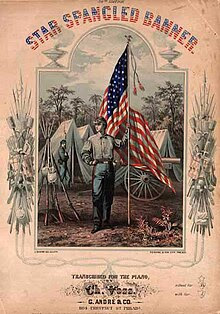 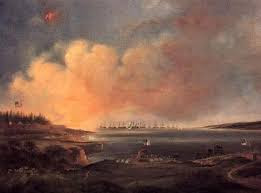 And the rocket's red glare, the bombs bursting in air,[battle_of_fort_mchenry.]
He also built four more two-deckers for the Navy. The lower hull of one of these, the 74-gun 'Cornwallis' of 1813, survived in use as depot ship and floating jetty at Sheerness from the 1870s to 1957, when it was still so strong that it had to be broken up using explosives. A model of 'Cornwallis', built by Jamsetjee's son at the same time as the ship, is the largest sailing warship model in the National Maritime Museum collection

{In the portrait the sitter is wearing a shawl and it was customary for the ship-builders to be given shawls by the representatives of the East India Company at the launching of a new ship. Jamsetjee Bomanjee was one of the famous Lowjee family of Parsi shipbuilders active in Bombay from the early 19th century and was highly respected there and by the East India Company Court of Directors in London. He was also the first Parsi entrusted by the Admiralty with the building of a man-of-war in India.}