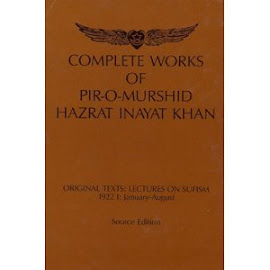 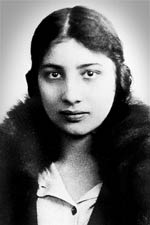 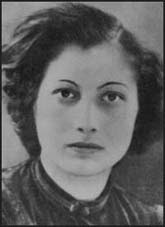 
Driven by ideals of freedom and calling herself Nora Baker, she volunteered for SOE, which specialised in dropping agents behind enemy lines. Trained at the secret Baker Street headquarters, she proved a poor recruit, being too clumsy, too emotional and too scared of handling weapons… Her finishing report, which the official historian of F Section found in her personal file long after the war, read: She has an unstable and temperamental personality and it is very doubtful whether she is really suited to the work in the field."
Noor’s courage and determination outweighed her ineptitude, and her masters sent her into France with a radio set and the codename Madeleine on June 16, 1943. 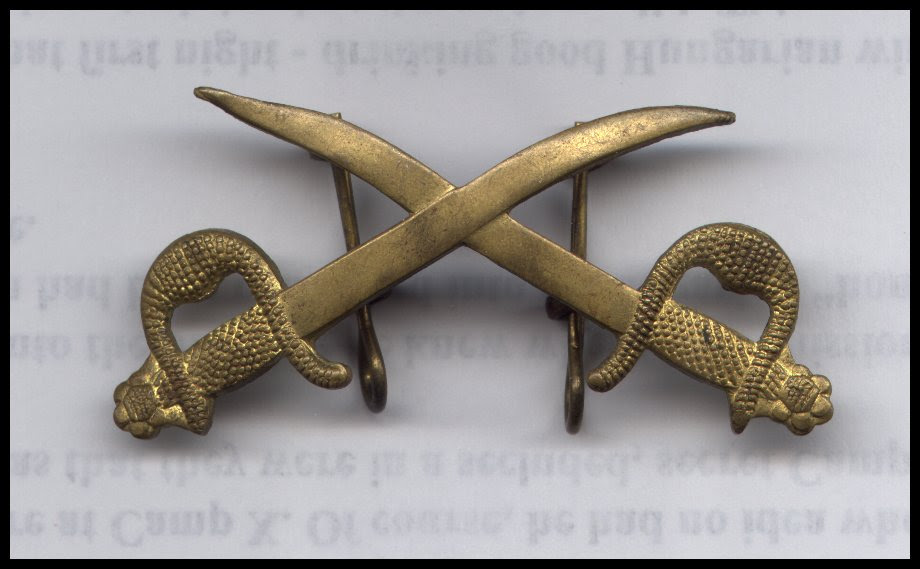 Nobody knows if it was just idealism or if it was a broken engagement that drove Norah to volunteer. But she did, spending a rigorous year in training and was then dropped behind enemy lines in France, Code name Madeline, Cover name Jean Marie. France was known territory, a place she had grown up in, and here she worked in constant danger, moving constantly avoiding detection, as the only woman radio operator spying & reporting on the German movements. 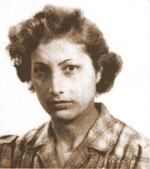 At the critical moment before the D-Day landing in Normandy 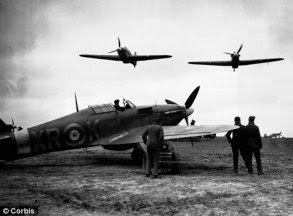 she remained the last radio operator on the Continent, ensuring the last link between the Allied Headquarters and the French Underground. The life and death of millions and the fate of generations after the war was to depend upon one spirited by the vocation of a hero who accepted the risk of the supreme sacrifice: torture.

Incredibly enough, the girl eluded the dreaded Gestapo for many months, cycling, with transmitter in tow, from one 'safe house' to another. It was even reported that she solicited the help of an enemy officer to string up her antenna - telling him, of course, that it was a clothes line!"She was instrumental in keeping a steady flow of information to the allies. But it was not to be, the Gestapo was catching up and eventually her friend’s wife betrayed her for a few francs. She was jailed, beaten, chained and interrogated.
General Sir Colin Gubbins, the head of SOE, said that she occupied “the principal and most dangerous post in France”. She had remarkable luck; stopped by the Gestapo as she cycled with her radio, she persuaded them that it was a cine projector. But after 3½ months her luck ran out; she was betrayed by Renée Garry, the sister of one of her Resistance colleagues. Garry is thought to have been jealous of her role as an SOE agent.
When captured, Noor was carrying a codebook listing all her radio messages, sent and received, which allowed the Germans to send false messages to London for a time. But after the war the former head of the Gestapo in Paris said that despite interrogation and torture, Noor never told them a thing.
Stoic & brave by day, sobbing at night, probably fearing the betrayal and compromise of her intelligence operation (which it did), she resisted interrogation for many months though trying unsuccessfully to escape a couple of times. She was not destined to live, however, Hitler had decreed that escaping agents should be shot after interrogation. 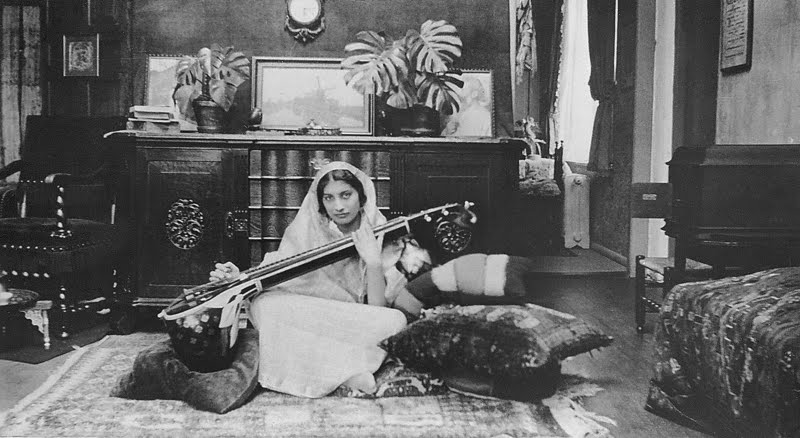 She never talked, and her courage so impressed at least one of the Gestapo, Josef Kieffer, head of Gestapo HQ in Paris, that at his trial he is said to have broken down in tears when questioned about her death. "The Germans had learnt nothing from her - not even her real name."On the fateful day, The SS undressed the girl and she was terribly beaten by Ruppert all over her body. She did not cry, neither said anything. When Ruppert got tired and the girl was a bloody mess he told her then he would shoot her. She had to kneel and the only word she said, before Ruppert shot her from behind through the head, was `liberté'." She was 30 years old. Dachau 1944.

“Here in Dachau on the 12th of September,
1944, four young woman officers of the
British forces attached to Special Operations
Branch were brutally murdered and their bodies
cremated. They died as gallantly as they had
served the Resistance in France during the
common struggle for freedom from tyranny.”

Bodies piled up in front of the crematorium at Dachau, May 1945
A French military band still plays outside her home in the suburbs of Paris every July 14. The country se worshipped, India, hardly knows her.

Bob Maloubier, another French refugee trained at Baker Street, sent home to become a successful saboteur and now aged 83, said yesterday: “Above all she was definitely a very brave lady. It was extremely tricky operating under the noses of the Germans.”
Noor unissa Inayat Khan – the great great great granddaughter of Tippu Sultan.Her father Hazrat Inayat , a man with a mission, to spread Sufism around the world, left India for America, met & married Ora-Ray Baker (Begum Sharada Ameena Baker). Tsar Nicholas II through Rasputin invited them to Russia and it was here that Noor was born in 1914. The Bolshevik revolution was brewing in Kremlin and it forced the family to move, destined for France where they settled and where Noor grew up, excelling in languages. Tragedy struck, Pir Inayat returned to India and died from illness. Noor was slowly settling down to become a writer (her published works – 20 Jataka tales is still available on Amazon), but when the Germans reached France, the remaining family fled to Britain where Noor became Nora and decided to join the war cause, along with her brother. But she was clear that she would work for the Allies during WWII to defeat Fascism and that she would go back to India after the war to join the freedom struggle against the British!!At a memorial service in Paris, General de Gaulle’s niece summed up her achievement: “Nothing, neither her nationality, nor the traditions of her family, none of these obliged her to take her position in the war. However, she chose it. It is our fight that she chose, that she pursued with an admirable, an invincible courage.”Noor’s comment about military distinction proved prophetic: at the "VE" and "VJ" days to mark the anniversary of the end of World War II, an astonishing fact came to light at the roll call, that it was Indians who outnumbered even the British as the largest recipients of Victoria and George Cross medals, the highest British awards for bravery.

SS Trooper Wilhelm Ruppert was tried for war crimes and executed by the Americans on May 29, 1946. 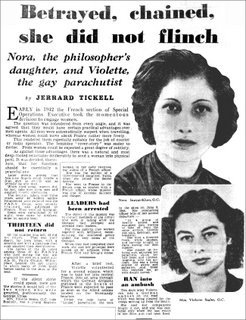 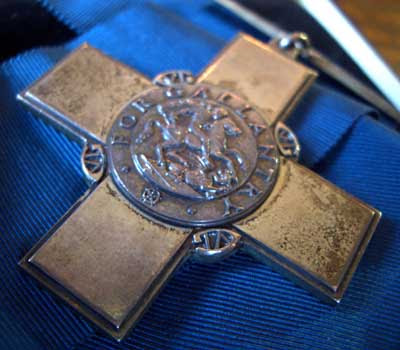 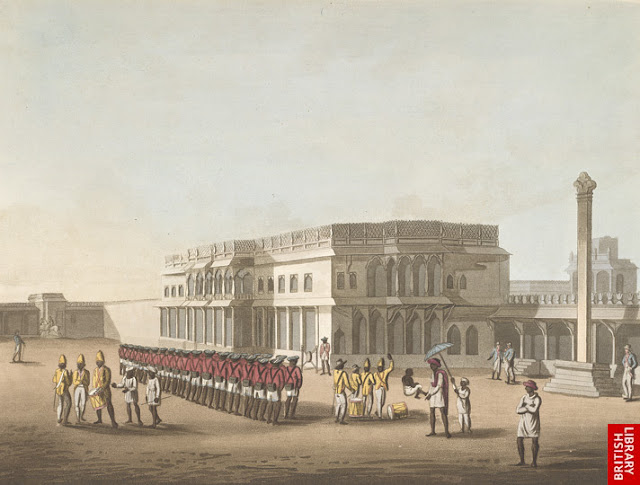 The North gate to Tipu's Palace 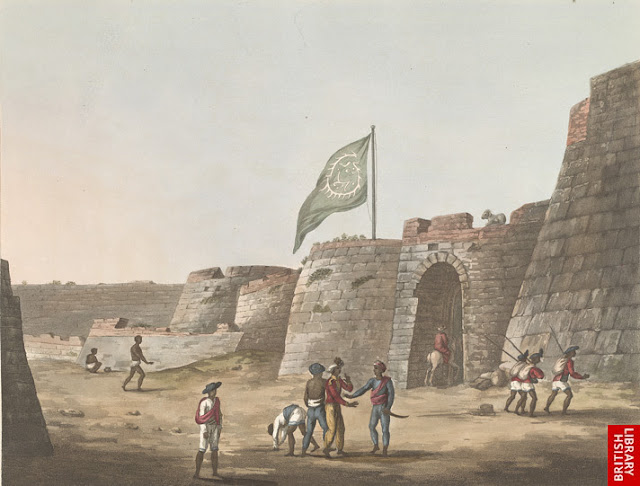 The northern gate to Tipu's fort in 1804 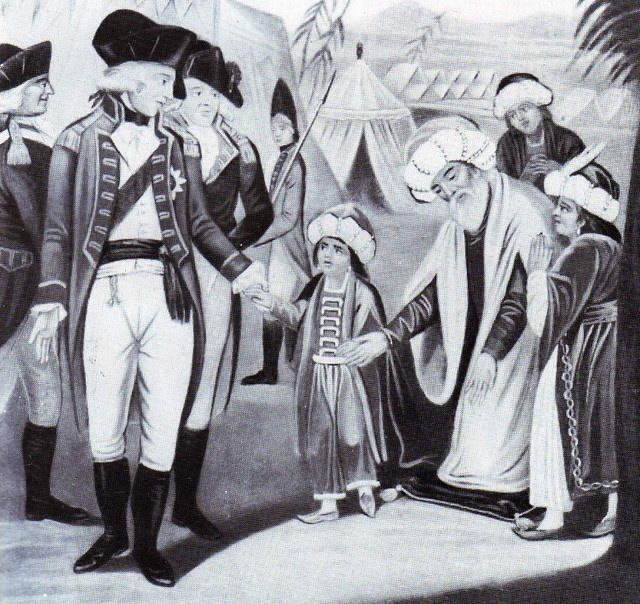 Kidnapping for ransom - Tipu Sultan's sons are taken hostage in 1793

This was after the successes of Cornwallis in the Third Mysore War and the capture of Seringapatam. There was a treaty whereby half of Tipu's area went under the British. The 'hostages' were taken to ensure implementation of the Treaty. 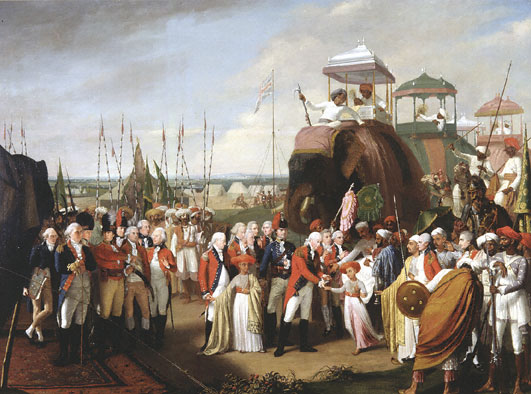 KIDNAPPING OF TIPU'S SON
['LATER BRITISH KIDNAPPED  CROWN PRINCE OF  PUNJAB IN A SIMILAR FASHION ; AFTER DEFEATING PUNJABI SOLDIERS IN 1849]
Dalip Singh was crowned to the throne of Punjab in 1843 succeeding his half-brother, Maharajah Sher Singh. After the close of the Second Anglo-Sikh War and the subsequent annexation of the Punjab on 29 March 1849, he was deposed at the age of eleven by the East India Company under Governor-GeneralHardinge and was separated from his mother, who was imprisoned. He was put into the care of Dr John Login and sent from Lahore to Fatehgarh on 21 December 1849. 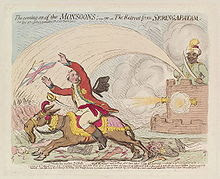 Political cartoon by James Gillray, making fun of Lord Cornwallis after his 1791 retreat from Seringapatam 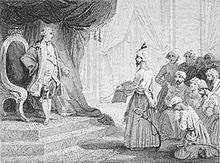 Louis XVI receives the ambassadors of Tipu Sultan in 1788. Tipu Sultan is known to have sent many diplomatic missions toFrance, the Ottoman Empire, Sultanate of Oman, Zand Dynasty and Durrani Empire

Tipu Sultan organized hisRocket artillery brigades known asCushoon's, Tipu Sultan expanded the number of servicemen in the various Cushoon's from 1500 to almost 6000. The Mysorean rockets utilized by Tipu Sultan, were later updated by the Britishand successively employed during the Napoleonic Wars.

Among his many innovations, Tipu introduced new coin denominations and new coin types, including this handsome copper double paisa weighing over 23 gm. The coin on the left also contains the emblem of the Sultanate of Mysore. 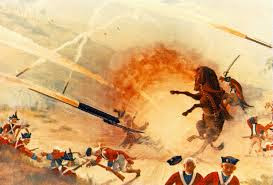 TIPU SULTAN'S ROCKET LAUNCH PAD[PIC: ABOVE] .AND PAINTING OF ROCKETS USED BY TIPU AGAINST THE BRITISH 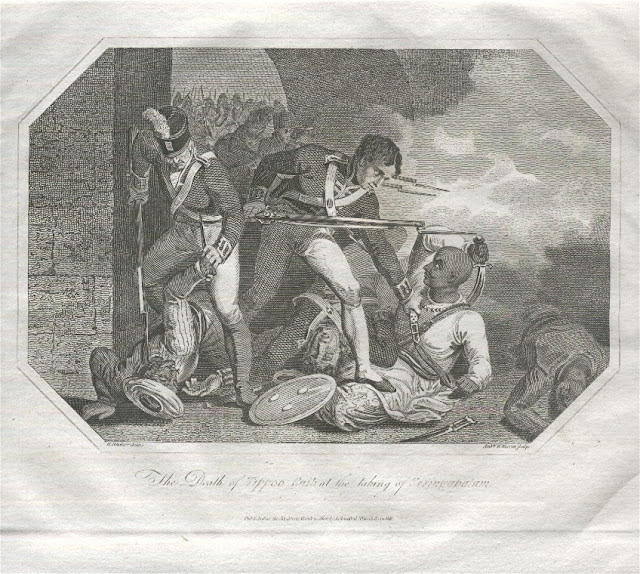 Death of Tipu at the taking of Srirangapattana 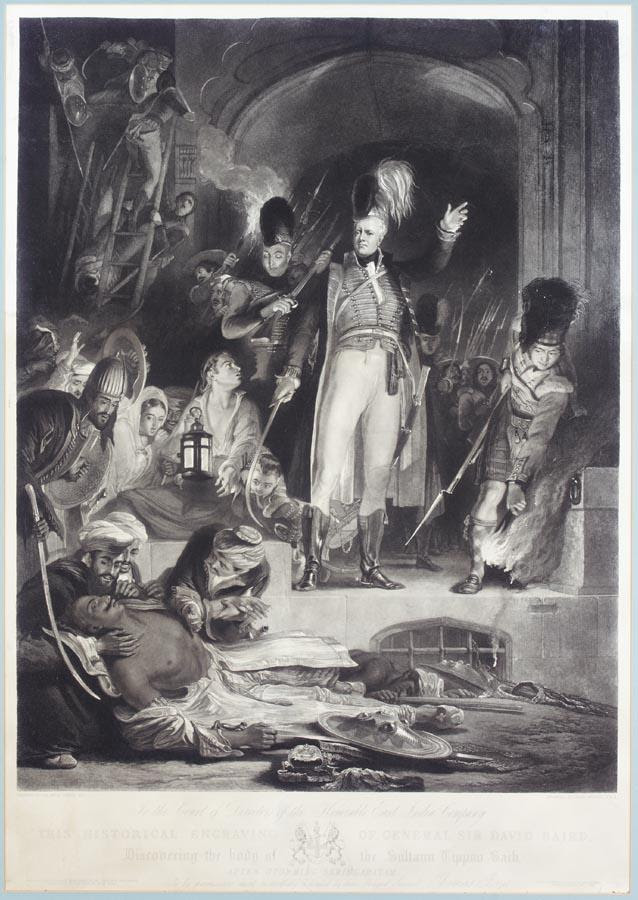 Finding body of Tipu -- coloured engraving by Samuel William Reynolds London 1800
Rajah Cawn and David Baird, discovering the fallen body of Tipu Sultan after the Seige of Seringapatam in the year 1799. 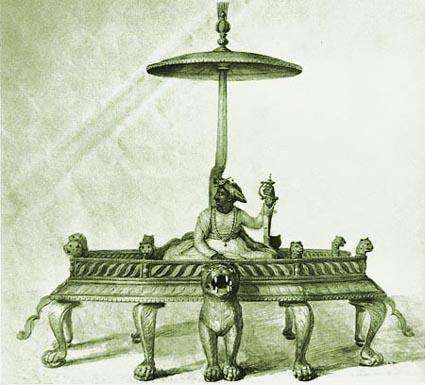 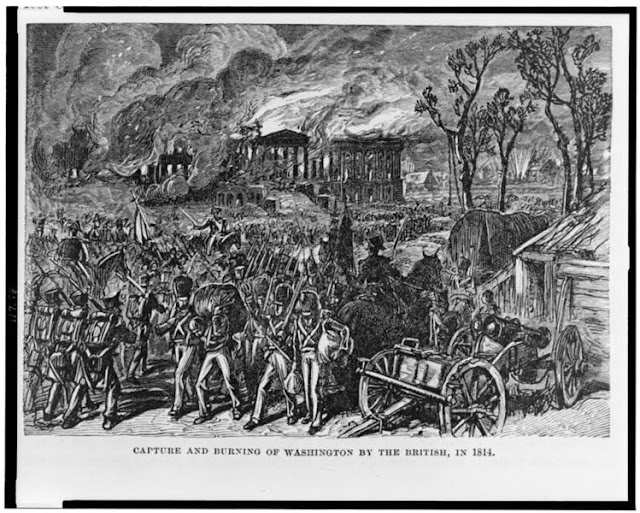 THE BRITISH COPIED TIPU'S ROCKET FOR WAR; AGAINST NAPOLEON AND  LATER CAPTURE OF WASHINGTON CITY 1814

The mausoleum housing Tipu's tomb is another example of Islamic architecture. Tipu's flag is in the foreground.

The tomb of Tipu Sultan at Srirangapatna. Tipu's tomb is in the middle

The Indian rocket experiences, including Munro's book of 1789,[4] eventually led to the Royal Arsenal beginning a military rocket R&Dprogram in 1801. Several rocket cases were collected from Mysore and sent to Britain for analysis. The development was chiefly the work of Col. (later Sir) William Congreve, son of the Comptroller of the Royal Arsenal, Woolwich, London, who set on a vigorous research and development programme at the Arsenal's laboratory

Tip of a Congreve rocket of the Napoleonic Wars, on display at Paris naval museum

War of 1812 between ENGLAND (ARMED WITH ROCKETS)

Gave proof through the night that our flag was still there.
O say, does that star-spangled banner yet wave
O'er the land of the free and the home of the brave?
;against America


AMERICAN National Anthem:-
And the rockets' red glare, the bombs


bursting in air
,
Gave proof through the night that our flag was still


there
. O say, does that star-spangled banner yet wave

the land of the free and the home of the brave? 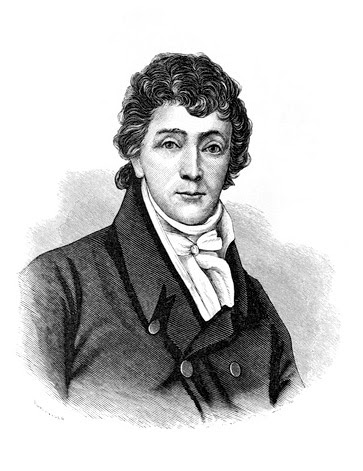 Then, in that hour of deliverance, my heart spoke              "Does not such a country, and such defenders of their country, deserve a song"
Francis Scott Key

US National Anthem by the Academy Choirs:-

;was visiting Wallops Flight Facility, Virginia, USA. There he “saw a painting displayed in the reception lobby. It depicted a battle scene with a few rockets flying in the background………It turned out to be Tipu Sultan’s army fighting the British”. 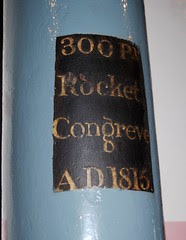 The Royal Arsenal at Woolwich contains a museum. The museum includes a very good exhibition of artillery with a history gallery.