Bombay to Goa by -steamer by wilfredbarretto 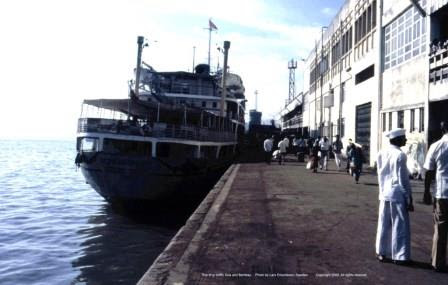 I still remember those days when my father would take us every summer to Divar Island (Goa) from Wadala, Bombay – by steamer. Back In the sixties, seventies and till 1991, there was a pair of steamers which used to ply from Bombay to Goa, carrying loads of passengers on a charming journey along the Konkan coastline. One called the Konkan Sevak and the other called the Konkan Shakti. One left from Goa for Bombay and the other from Bombay for Goa at 10.00 in the morning. 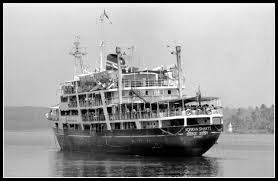 Konkan Shakti – Bombay to Goa
What an exciting trip that used to be ! The passengers were a motley group of Goans, tourists, hippies, Konkan coast travellers, all in a festive, picnic-like mood. Out would come guitars and other instruments, along with packed food, and it would be one long party all the way as the ship would make various halts at Vengurla, Malvan, Ratnagiri and other place, to take on more passengers who would arrive in large hand-rowed canoes, which would then take the disembarking passengers.  Most old timers who have experienced these journeys feel very nostalgic. The entire experience was a trill to the boot something todays journeys to Goa by plane, train or bus don’t give you. And all that for not so big a price.

Konkan Shakti Bombay Goa ferry 1970
They were a few cabins for those who wanted privacy and were willing to pay a high price. Then there was an upper deck for those who could afford. And a lower deck for everybody else. You bought your ticket at ferry wharf (Dockyard Road – Mazagoan) and stood in a long line waiting for the gates to the gangplank to open.  Once they did you ran, with a clutch of bedsheets. And you tried to spread them out on the life rafts that were spread out on the deck. This staked your claim. The ship would sound its foghorn and the great voyage would commence. You would settle in and eye your neighbours. A half hour ago you would have run them off the gangplank drawn and quarrelled if they stood in your way. 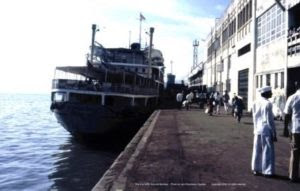 Konkan Shakti – Bombay to Goa
Now you open your alcohol bottles and lunch packs and invite them to share. The Goan spirit would slowly begin to show.  You could see guys strumming guitars and some young Goan boys even getting friendly with Goan girls. Singing in some corners with spirits getting a bit high by midday.


Here are 10 Beaches in Goa you have never visited, probably.

You would definitely see a lot of “hippies” on these journeys, travelling to Goa. Haversack, guitars et all. Typical sight during those days. 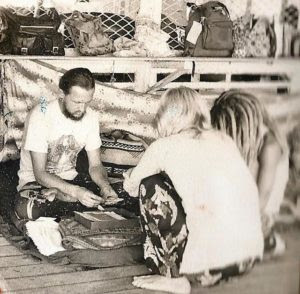 Hippies – Bombay to Goa
The bucket man comes around. A bucket piled high with Limcas and Thums Up. And in his many pockets he has quarts of Feni. These Feni bottles he would sell at Goa prices, even though you can still see the Gateway in the distance.  The bell is sounded for lunch in the canteen. For lunch you get fish curry rice. With fish that tasted so fresh, they’ve probably jumped straight out of the Arabian Sea into the kitchen.
The passengers took turns to eat in the canteen. You bought your coupon for a lunch service. And carried your Feni to the table with you. The ship would meander along the Konkan coast all this while. Occasionally, one would spot dolphins along the route.


Reminiscing the Caminhão transport of a Goan era gone by

A man would come around announcing Housie. And everyone who was tired of looking at pristine beaches, at swaying coconut trees, at the rise and swell of the sea would head for the mess. Now cleared of fish curry and rice. Tickets would be sold. The electrical engineer would be deputed to call out the numbers. A few Feni glasses would make their appearance. The tables  had raised borders to keep the glasses from getting to know the floor. The housie would get under way with Jaldi fives and lines and full houses helping to defray the cost of your ticket.
Back onto the deck to watch the sunset. While this little world unto itself chugged on towards Goa, the bucket man had run out of Limca so now you were drinking feni with limbu pani. And after the third peg of Feni the talk turned to God and love and who made the best Goa sausages. Goan spirit at its best, again!
Along the Konkan coast, towards the late night, as the ship reached its port of call it would pull a little closer the coast. Little canoes would come out from the harbours of Vijaydurg, Sindhusurgh, Jaigadh and Ratnagiri to ferry the passengers to these port.  They passengers would get down on a rope ladder up the side of the ship. The ladies making sure their saree didn’t snag in the rungs.  The passengers having disembarked on their port of destination, the ship would sail again along the coast line towards Panaji, Goa.


Here are some pictures of a popular festival in Goa, on the Island of Divar.

Dinner was announced in the now familiar, as your own house, dining hall cum housie room. Back to the deck post dinner. Where the rosary would commence. All five decades. The whole litany. Petitions at the end for everyone and everything. Including Fluffy, whom the neighbours were looking after, because they didn’t allow dogs on the ship.
The life rafts that had doubled up as card tables, bar counters and nappy changing tables, were now converted into beds. And you lay your weary head to rest.
Somewhere in the night we’d pass the sister ship, a toot from one Captain to the other to let him know all was well with the world.
Sunrise would wake you up. Smiles to everyone around you. Now you can see the silhouette of our beloved Goan coast line. Sand strewn beaches in the distance, lined with palm trees. What sight it was in the fresh morning air ! Some of us will never forget these scenes! Engraved in our heads forever.  What followed was breakfast coupons and hot tea.
Between 8.30 am and 9.00 am you were sailing past Chapora fort. Then Anjuna.  Followed by Baga hills in the distance, with the Jesuit retreat house at its peak. Onwards to Calangute then Candolim. Then around the Fort Aguada. Finally, a grand entry, up the Mandovi River, past the barges loaded with iron ore. A beautiful experience, etched forever in our memories!
Time to disembark. Pack your stuff and exchange telephone numbers and addresses with the friends you just made since last morning. And offcourse, promises to stay in touch. Best wishes exchanged for the holidays and pending land disputes.
Then there was another sight to watch. Relatives waiting at the Panjim dock to receive visiting families, nephews, cousins, uncles and what have you. And as we step onto the jetty at Panjim, a sign of the cross and a mumbled prayer in thanks for a safe and happy journey. 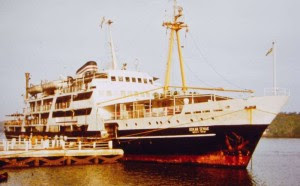 Konkan Shakti – Bombay to Goa
The  two steamers — Konkan Shakti and Konkan Sevak, were co-opted for the Sri Lanka War in the late 1980s, and the grand Goan party was over. One of them is now somewhere in the Andaman Islands. Although, Damania Shipping started a hovercraft service on the same route in 1994. But, it was never really the same thing in every aspect and the thrill you got in the old sea transport.  Damania used a beautiful Scandinavian-built vessel, with aeroplane-style reclining seats. The trip from Mumbai used to take seven hours to reach Panaji. The catamaran too, travelled around 40 km offshore, giving travellers a glimpse of the palm-fringed Konkan coast.
After the service’s last voyage in 1991, Konkan Shakti and Konkan Sevak, the two vessels operated on the route, were sent to ferry the armed forces to Sri Lanka at the behest of the late Prime Minister Rajiv Gandhi.


Here are more videos and pictures of  Divar Island in Goa.

Today you will be lucky to find one Goan or a Goan family traveling with you in the same train, bus or flight. What surely makes the the difference is the cultural aspect of us Goans.

https://en.wikipedia.org/wiki/1990_airlift_of_Indians_from_Kuwait
The 1990 airlift of Indians from Kuwait was carried out from 13 August to 20 October 1990 after the Invasion of Kuwait. Air India holds the Guinness Book of ...

www.indiatimes.com › Entertainment
25 Years Ago India Mounted World's Largest Air Evacuation In Kuwait, Airlift Is Its Story ... Akshay Kumar wants the story of his upcoming flick, Airlift, to be in the ...


In the news
Infographic: The real story behind airlift of Indians from Kuwait in 1990
Times of India‎ - 10 hours ago
The ministry of external affairs has expressed strong reservations about a storyline depicted ...
'Airlift' crosses Rs 100 crore mark in India
IBNLive‎ - 1 day ago
'Airlift distorts recent history and reduces facts to fantasy'
Hindustan Times‎ - 2 days ago

The real story behind airlift of Indians from Kuwait in 1990

timesofindia.indiatimes.com/india/...airlift...Kuwait-in.../50816844.cms
10 hours ago - The ministry of external affairs has expressed strong reservations about a storyline depicted in a movie on the airlift of Indians from Kuwait in ...

Why Diplomats, Officials Are Upset With Akshay Kumar's 'Airlift'

www.ndtv.com › All India
5 days ago - A still from Airlift, based on the evacuation of Indians after the 1990 ... of Kuwait by Iraq - has left diplomats seething over their portrayal. While a ...

indianexpress.com › india › india-news-india
4 days ago - 'Airlift' starring Bollywood superstar Akshay Kumar, which revolves around the evacuation of Indians from Kuwait during the 1990 Gulf war, took ...

The Berlin airlift was remarkable, but the largest civilian ...

scroll.in/.../the-berlin-airlift-was-remarkable-but-the-largest-civilian-evac...
Jul 2, 2014 - In two months in 1990, India managed to evacuate more than 110,000 citizens from Iraq and Kuwait via an airlift that included nearly 500 flights.