Defunct Tower of Silence in Andheri-Mumbai The Andheri ‘dokhma’ was completed in 1931 to cater to the Parsis living nearby.
RELATED
At Malabar Hill, the Parsi Towers of Silence are shrouded in mystery— and thick foliage — with few community members ever spying the stone walls of the seven 'dokhmas' or roofless towers where the community's dead are laid to rest. However in Andheri's Salsette Parsis Association Colony, six-storey residential structures form a tight arc around a defunct dokhma. Children swing and slide just a few feet away and plans are underway to create a grassy patch alongside the tower's wall where the colony's youngsters can play football or an impromptu game of cricket.

Residents explain that their nonchalance about living alongside this structure — which is meticulously cleaned by a band of young Parsi men every few years - stems from the fact that the 83-year-old dokhma has remained unused for well over half a century. Exactly when it fell into disuse, however, remains a matter of conjecture. "It was open for only a few years because it was hard to get pallbearers to come all the way from Bombay to perform the last rites," says 79-year-old Ardesher Patel, whose paternal grandfather was instrumental in setting up the dokhma. He estimates that only 10 bodies were laid to rest within the stone wall of the Andheri tower.

In his book, "History of the Bombay Parsi Punchayet 1860-1960", Sapur F. Desai explains what happens to the body after it's placed on one of three concentric rings encircling the central well. "The body is disposed of within an hour or so by scores of birds, mainly vultures, and only the bones remain," he writes. These are then swept into the well, which is connected via drains to four exterior wells. Each one is fitted with layers of sand and charcoal to filter out residual impurities before they enter the soil. "The Zoroastrians consider air, water, earth, trees and all natural elements as sacred and not to be polluted. The Dokhma serves that purpose," he explains.

Before the Salsette Tower of Silence was built, Parsis who had moved to Andheri and Santa Cruz to escape the 1896 plague faced great hardship while transporting deceased family members to the Kemp's Corner Doongerwadi via horse cart. Fortunately for them, the Salsette Parsis Association (SPA) came to the rescue. The trust secured a nine-acre, hilly plot from the government in Andheri's Moghra village and began raising over Rs 1.5 lakh to fund the project. The Tower of Silence opened in 1931 and "from the early hours of the morning till late in the evening endless streams of Parsi devotees visited the place," reported the Times of India. 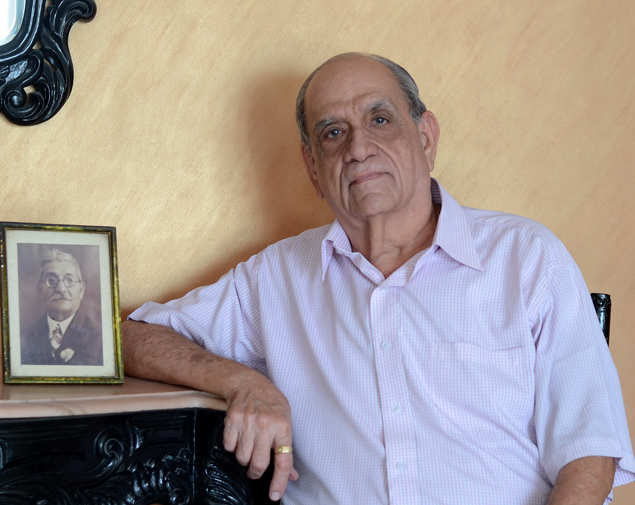 Ardesher Patel's grandfather played a key role in setting up the tower.

Patel's grandfather and SPA founder-trustee, Ardeshir Bhicajee Patel, was a Versova resident, who owned a jewellery-cum-curio shop at Apollo Bunder. Besides helping set up the dokhma, he also established a fire temple in memory of his deceased son, and a residential colony for poor Parsis. His grandson, who is chairman emeritus of the SPA, says that at one time the only structures around the dokhma were prayer halls for mourners and a priest's quarters. Construction on the current housing complex, which has six residential buildings and houses about 800 Zoroastrian families, didn't begin till 1994. Even at that late date, a few community members wrote in to the "Parsiana", a community magazine, asking that the dokhma be revived rather than redeveloped.

Though the Tower of Silence was completed in 1931, its foundation stone was laid on April 24, 1927. About 10,000 Parsis — that is a fourth of Mumbai's current Parsi population — attended the three-hour-long ceremony, which had not been performed since the last Tower of Silence was erected in Bombay more than 80 years ago. A Parsi battalion worked alongside troops of Parsi Boy Scouts and Girl Guides to control the crowd, and the Bombay, Baroda, and Central India Railway (BB&CI) arranged to run "six special trains" to ferry the visitors to Salsette. The ceremony concluded with Parsis forming a queue to inspect the foundation. "Each person threw some money into the pit as a small contribution to the fund, which is regarded by the orthodox Parsis as an act of great piety," wrote TOI in their detailed report on the day's proceedings.

(This series looks at little-known places in the city)