A hovercraft service ran briefly between Navi Mumbai and the Gateway of India in 1992-93 but had to shut down because of problems. In 2005, there was an attempt to revive the project and Metro Infrastructure and IIT-Powai were appointed as consultants, but the project did not take off.

Caption: Hovercraft at juhu beach , bombay mumbai , maharashtra , india. Image Code: DPA-MMN-85510. Photographer: Dinodia. Collection: Dinodia Photo. Rights Managed
Several years ago, water transport from Navi Mumbai to Mumbai had to be stopped due to denial of landing point by the Mumbai Port Trust (MbPT). Cidco then shelved the project. The Maharashtra State Road Development Corporation (MSRDC) was later asked to execute the project. Currently, it has invited expressions of interest to revive the project that aims to connect Ferry Wharf to Nerul. 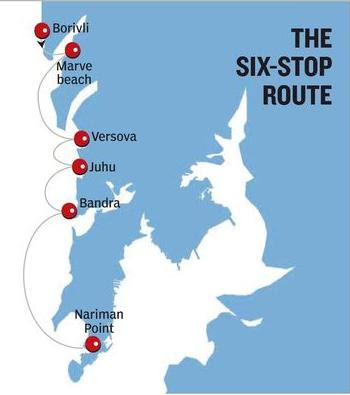 As a viable and attractive alternative to Mumbai's congested roadways, air-conditioned hovercraft service has several advantages.


Days of year the service can run 300

For the hovercraft service to be really attractive, a Ro-Ro (roll on and roll off with vehicles) option would be the best. It will also cut down the congestion on the roadways. This is not being considered currently.

The past has not been so rosy for this service. Vashi to Gateway of India service was started in 1994, but was suspended due to lack of jetties, support from the government. What is required is permanent set of jetties along with a terminal.

They ferried 1,000 passengers a day, regularly on a 30-minute trip between Juhu and Chowpatty beach.

The government had guaranteed Triton that they would provide jetties and access roads on the beaches. However, even two years later, these facilities were non-existent. The government alloted Triton a plot of land to land the hovercraft at Free Press Journal Marg at Nariman Point. Trial runs, ran successfully. However, local fisherfolk obstructed the hovercraft by anchoring their boats in the path of the craft.
To add to that The BMC demolished Triton's booth at Nariman Point.

The service, originally intended to run between Nariman Point and Juhu beach was truncated to terminate at Chowpatty.

MUMBAI: Congress legislator from Vile Parle, Krishna Hegde, has accused ward officials of favouring traders and developers at the cost of locals by allowing them to encroach upon reserved open spaces.

In a letter to municipal commissioner Sitaram Kunte, Hegde said that at least three prime plots reserved for various amenities totalling over 2 lakh sq feet in Vile Parle have been encroached upon and the BMC has been reluctant to take action. On the Andheri-Ghatkopar link road, a marble trader alone has usurped 83,610 sq ft, he said. The reserved open space is being used to cut, grind and polish marble. "The entire plot is an amalgamation of eight plots and is reserved for a recreational ground. The local K-East ward office along with the civic legal department are dragging their feet over the removal of the encroachment. Here there is a single encroacher," alleged Hegde.

A senior civic official said the HC had stayed the eviction and the matter went to the apex court. "Last month, the SC vacated the stay and we have now started the acquisition process. We have served eviction notices but since the structures are standing since 1989-90 we cannot remove them unless we provide alternate space,'' he said. Hegde said that there was just one structure present there in 1989 and the marble factory came up only three years ago.

A second plot on Malviya road, spread over 40,000 sq ft and reserved as a recreational ground, is still to be cleared. A third plot measuring 50,000 sq ft near the Milan subway flyover, reserved for a bus depot, is also under encroachment. The civic official said the process of acquisition of the plot on Malviya road has been stayed.

Hegde said, "It took me two and a half years and over 20 reminders before the BMC acquired a plot adjoining the Malviya road plot that was encroached upon and the same story is being repeated."