1945 TSUNAMI IN BOMBAY FOLLOWING THE - 28 November 1945 Makran Mw 8.1 Earthquake .An unresolved problem with this earthquake, however, is that although a minor tsunami was caused by the earthquake, the damaging tsunami occurred 2-3 hours later both near the epicenter and at Karachi

On 28 November 1945,  an 8.1 magnitude earthquake was generated  in  the northern Arabian  Sea off the Makran  coast (Berninghausen, 1966; Quittmeyer and
Jacob, 1979; Ambraseys and Melville, 1982). The earthquake was felt in Karachi, Pakistan, where ground motions (figure 2) lasted approximately 30 seconds, stopping  the clock  in  the Karachi Municipality  Building  and interrupting  the communication  cable link  between  Karachi and  Muscat  off Pakistan's Makran Coast (Balochistan) generated a destructive tsunami in the Northern Arabian Sea and the Indian Ocean. More than 4,000 people were killed along the Makran Coast of Pakistan by both the earthquake and the tsunami.


The tsunami reached a height of 17m(50 feet) in some Makran ports and caused great
damage to the entire coastal region. A good  number of people were washed away. The
tsunami was also recorded at Muscat and Gwadar.


The damage from the earthquake was great, but the greatest destruction to the region was caused by  the tsunami that was generated. Tsunami waves "swept the whole of the Arabian Sea coast" .
The fishing village of Khudi, Pakistan and  its entire population, 48  km west of Karachi, was swept away.
Tsunami has been observed in the North Indian Ocean on the Iranian coast

An unresolved problem with this earthquake, however, is that although a minor tsunami was caused by the earthquake, thedamaging tsunami occurred 2-3 hours later both near the epicenter and at Karachi
INDIA - Tsunami waves as high as 11.0 to 11.5 m(30 feet) struck the Kutch region of Gujarat, on the west coast of India. There was extensive destruction and loss of life. Eyewitnesses reported that the tsunami came in like a fast rising tide.


The tsunami reached as far south as Mumbai. Bombay Harbor, Versova (Andheri), Haji Ali (Mahalaxmi), Juhu (Ville Parle) and Danda (Khar). In Mumbai the height of the tsunami was 2 meters. Fifteen (15) persons were washed away.


According to reports the first wave was observed at 8:15am (local time) on Salsette Island in Mumbai (3). There was no report on damage at Bombay Harbor. 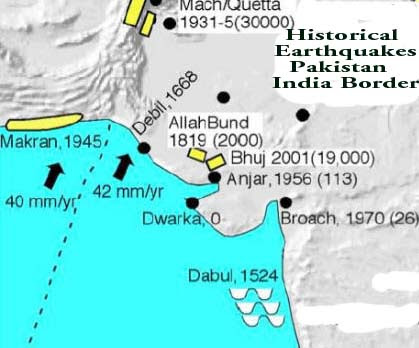 Some recorded tsunamis in India: 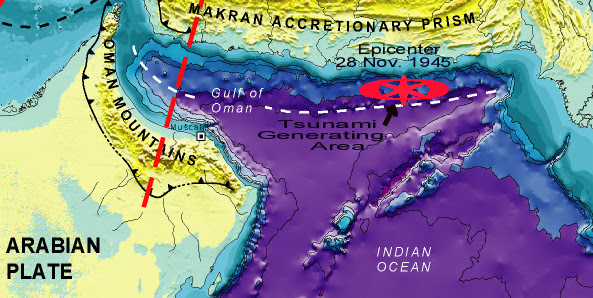 Other Earthquake Effects
Reports by S.M. Mathur and D.N. Wadia (pertaining to the Geology of India) mention that the earthquake caused the eruption of a mud volcano a few miles off the Makran Coast of Pakistan. This eruption formed four small islands. It was reported that a large volume of gas emitted at one of these islands ;sent flames "hundreds of meters" into the sky.
Such mud volcanoes are not uncommon in the Sindh region of the Makran coast.
Their presence indicates the existence of high petroleum deposits. They are known to discharge flammable gases such as methane, ethane and traces of other hydrocarbons.

Thus, the flames that were observed following the eruption of one of the mud volcanoes resulted from emitted natural gas, which caught fire after the earthquake. 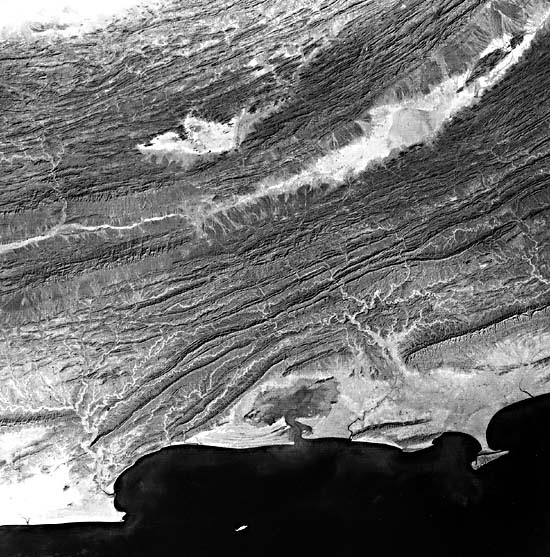 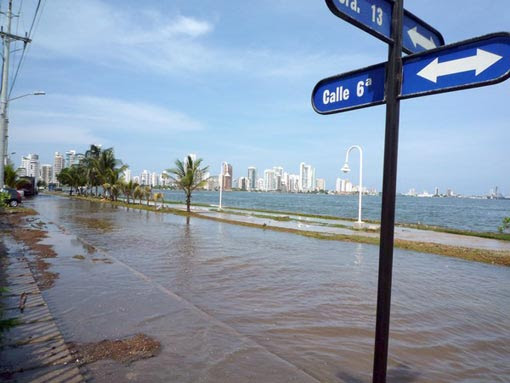 
Potential[future] Tsunami Generating Sources Along the Makran Seismic Zone and Bombay
A factor that could contribute to the destructiveness of a tsunami along the Makran coastline would be the relatively large astronomical tide, which is about 10-11 feet.

A tsunami generated during high tide


would be significantly more destructive; FOR mumbai CITY.

soon MUMBAI BEACHES MAY GET COVERED BY SEA WATER

Tsunami warnings were issued for coastal areas across the Pacific basin - from Hawaii to Chile - as a result of the waves triggered by the Japan earthquake.
This map shows the Pacific Tsunami Warning Center's "tsunami forecast model" of wave heights above normal sea level across the region and how long after the 0546 GMT earthquake they were expected. The monster 8.9-magnitude earthquake which hit Japan was the country's biggest ever and the seventh largest on record, according to US Geological Survey data.
Here are the largest magnitude earthquakes in history, according to the USGS website:
9.5, Chile, May 5, 1960
A quake off the coast of southern Chile killed more than 1,600 people and left 2,000,000 homeless.

9.2, Alaska, United States, March 27, 1964
A quake and tsunami killed 128 people and caused severe damage to the state's largest city Anchorage.
9.1, Indonesia, December 26, 2004
An undersea quake caused a massive tsunami that devastated coastlines in countries around the Indian Ocean, ultimately killing more than 220,000 people.
9.0, Russia, November 4, 1952
A quake off the coast of the remote Kamchatka peninsula in Russia's far east caused Pacific-wide tsunamis.
9.0, Peru, August 13, 1868
The port of Arica, which is now part of Chile, was hit by a quake felt up to 1,400 kilometres (870 miles) away.
9.0, North America, January 26, 1700
A quake affecting 1,000 kilometres of coastline set off a tsunami that crossed the Pacific Ocean and caused damage to coastal villages in Japan.
8.9, Japan, March 11, 2011
An undersea quake off northeast Japan unleashed a 10-metre-high tsunami which left devastation in its wake.
8.8, Chilean coast, February 27, 2010
An offshore quake and tsunami killed more than 500 people, most in the coastal area of Maule, 400 kilometres (250 miles) south-west of the capital Santiago.
8.8, Ecuador, January 31, 1906
A quake struck off the coast of Ecuador and Colombia and was felt as far away as San Francisco.
8.7, Alaska, February 4, 1965
A quake in the remote Rat Islands generated a tsunami reported to be 10 metres high.
8.7, Portugal, November 1, 1755
The capital Lisbon was struck by a quake while many residents were in church. A quarter of the city's population perished.
8.7, Chile, July 8, 1730
A quake hit the city of Valparaiso, 120 kilometres northwest of the capital Santiago, causing a tsunami which hit more than 1,000 kilometres of coastline.

More than 300 dead and more than 500 are feared missing in the massive earthquake that struck Japan on Friday, March 11, 2011. There has been widespread loss to infrastructure, the coastal areas of Japan being the worst affected.
Disclaimer : All efforts have been made to make this image accurate. However Compare Infobase Limited,its directors and employees do not own any responsibility


The city-based Indian National Centre for Ocean Information Services (INCOIS), which ruled out a tsunami threat for the Indian Ocean on Friday, reconfirmed on Saturday that the sea levels in the Indian Ocean were not different from what had been anticipated.
INCOIS issued the first bulletin just seven minutes after the massive undersea quake near the east coast of Honshu in Japan on Friday.
The Indian Early Tsunami Warning System based on the data it received from seismic stations, sea level gauges, bottom pressure recorders (tsunami buoys) and the numerical model to predict the water level changes expected at various locations along the Indian coast worked well, a release from INCOIS said.
It reported that following the main shock on Friday till 9 a.m. on Saturday, about 130 aftershocks of more than 6.0 magnitude were recorded.
In fact, the first bulletin issued at 11.24 a.m. predicted the estimated magnitude of the quake in Honshu at 7.9 Mwp, and the estimated focal depth was 10 km. This matched with the initial magnitudes reported by other centres such as USGS.
Subsequently, on the arrival of more data from seismic stations, the magnitude was re-estimated at magnitude 8.6 and focal depth 5 km. This information was issued through the second bulletin at 12.15 p.m. Both the bulletins indicated that the India Ocean did not face a tsunami threat.
Both the bulletins were disseminated to the relevant departments in the Centre such as the Ministry of Earth Sciences, the National Disaster Management Authority, and other regional contacts.
INCOIS has 22 sea-level gauges at Aerial Bay, Chennai, Ennore, Garden Reach, Haldia, Kandla, Karwar, Krishnapatnam, Marmagao, Machilipatnam, Nagapattinam, Paradeep, Port Blair, Vadinar, Visakhapatnam, among others, and three bottom pressure recorders. Two such recorders in the Arabian Sea and the Bay of Bengal got triggered to tsunami mode due to the arrival of seismic waves.
PLACES NEAR BOMBAY PRONE FOR EARTH QUAKE
RED:-SEVERE EARTH QUAKE POSSIBLE
BOMBAY:-MODERATE EATH QUAKE POSSIBLE 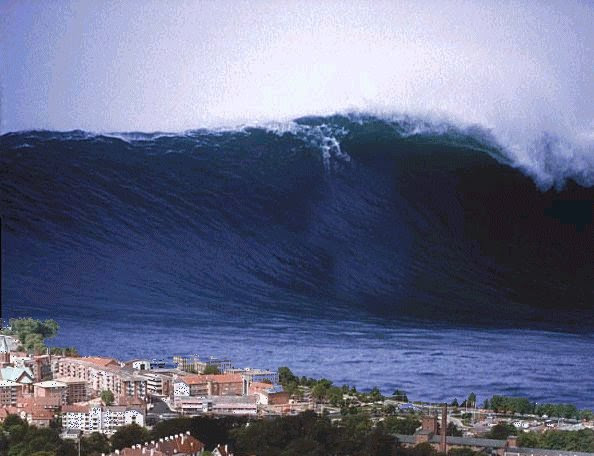 Mumbai: While several parts of coastal India had hit the panic button, the financial capital of the country was on the alert, but not in fright.
According to a senior BMC official, "Studies and experts assert that tsunami can never hit Mumbai, as there isn't any epicenter in the ocean on the western side. It’s only earthquakes that can bother the city because there are three major active fault lines in Panvel, Koyna and another spot, which is in Pakistan.”
Chief officer of BMC’s Disaster Management Cell M Narvekar said, “Though there was no alert in Mumbai, as per the norms, we had kept all the facilities on a stand-by. Also, we were constantly taking details from INCOIS, which is the central nodal agency and gives accurate hourly updates.”

Narvekar added that there are three types of SOPs — Alert, Warning and Watch — and Mumbai was on Watch, wherein the situation was only to be observed.
Likewise, civic body’s Standing Committee Chairman Rahul Shewale said, “We are prepared for disasters like buildings collapse during rains and earthquake. In case of an emergency, we’d have activated the ward-level disaster controls following which 256 fire engines, 30 ambulances, along with several private ambulances would have been sent to help people.”
(For updates you can share with your friends, follow IBNLive on Facebook, Twitter, Google+ and Pinterest)