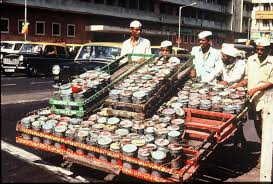 As we get wary about bombs in tiffin boxes, Mumbai's oldest service sees 25 per cent reduction in manpower


Easily Create A Website In 15 Mins. Free From Google To Your Business!


www.indiagetonline.in
They have been around since the last decades of the 1800s and their efficient service has not only got them a meeting with Prince Charles but also the attention of the business world. Their CEO has been called to give a talk at IIMs and they have received a mention in the Harvard Business Review. But, is the era of dabbawalas coming to end?

Fewer youngsters want to join the profession, preferring the lives in their villages to the gruelling schedule of a dabbawala. File pic used for representation purpose only
There are two associations in the city that run the supply chain that ensures that all of Mumbai’s office goers get to eat home-cooked meals even at work — the Nutan Mumbai Tiffin Box Suppliers Trust and the Mumbai Dabbesaunstha Lawad Samiti. Between them they serve the city with 5,000 dabbawalas.
However, members from these organisations say that their numbers have been gradually reducing since 2006, following the train blasts and now, they are down by 25 per cent. “After the blasts (in which bombs were kept in pressure cookers), schools and offices have become cautious and many people have discontinued our services,” says Yamnaji Ghule, the president of the Nutan Mumbai Tiffin Box Suppliers Trust. He adds, “There is a lot of screening at these buildings and we are not allowed to wait. Thus, our services are no longer viable.” Many schools and offices have in-house catering services which completely negate the need for a dabba from home.
This, added to inflation, has led to many dabbawalas leaving the city altogether and returning to their villages to farming. Thirty-four year-old Vilas Shinde, a dabbawala who lives in a slum in Andheri (W), says, “Most of us are from villages around Pune. Initially, the tiffins were provided to mill workers. Later, when the mills vanished the city’s corporate offices started using our services. But, that too is reducing. The current owner of the company we serve uses our service only because his father believed in our work and sincerity.”
Between them, Shinde and his wife, a domestic help, manage to earn Rs 14,000 per month out of which Rs 3,000 is just for rent. “I used to pay Rs 300 for rent once. Gas prices have shot up so much that we are wondering if we should start using a mud stove. Inflation is so high that our people too are going back to their villages. If they can earn the same salary in their villages tilling their own land, why would they stay here?”
Shinde, who cleared his Higher Secondary Certificate (HSC), lives in a 100 sq ft hutment with eight other members of his family, including his two children and mother.
What is adding to the problem is that fewer youngsters are eager to join the profession. Shaila Yevle, wife of a 35 year-old dabbawala Baban Yevle, says, “My children study at private schools their total fee is Rs 2,400 per month. My husband has to take up two shifts to make ends meet. This is not a profession my son wants to join.”
Yevle says, “The young generation won’t be able to work in a city like Mumbai and hardly anyone is coming to join the team now. When our villages are developing why would we work here? We can live a peaceful life there with the same salary.”
Though the dabbawalas receive an annual hike of Rs Rs 50 to Rs 100, says Shinde, the dabbawala community fears that may not help as even customers are beginning to feel the pinch of inflation and are cutting costs. Kamlesh Natha Gadade, 50, who has been working as a dabbawala for the last 30 years, says, there was a time when he would pick 50-60 tiffins a day. A number which has now reduced to 20. “I earn Rs 8,000 a month and my wife supports me by working as a domestic help. Every year I pay Rs 7,000 for my son’s education. He will be want he wants to be. But will not enter my profession because no well-educated youth would like to do our job.
“I work from 8 am till 5.30 pm. People who are leaving us are either those who have become very old and can’t carry tiffins on their heads or the ones who feel that they want to earn peacefully and return to their villages.