Chances are you may or may not have heard of Anandibai Joshee, the first Indian woman to attend an American medical college and get a medical degree. Anandibai studied at the Women’s Medical College in Pennsylvania and returned to India after completing her studies. Tragically she died within months of her return on February 27, 1887. She was barely 22 years old.
The reason why we may not have heard of Anandibai is because she came to the US in the late 19th century. The US did not figure in the imagination of young Indians under the British Raj and neither was  it their country of preference to study. It was England and the English universities that were the preferred destinations for modern young Indians like Kadambini Ganguly (who studied medicine in England the same time Anandibai was studying in the USA), Pandita Ramabai, Gandhi, Nehru and others.
So, how did Anandibai end up in the USA to study medicine? It appears to be a combination of preparation and luck along with a set of happy coincidences.
Anandibai was born on March 31,1865 to Ganaptrao and Gungabai Joshee in Poona, India. When she was 9-10 years old she was married off to Gopalrao Vinayak Joshee, who worked for the Indian postal service. Gopalrao was passionate that young women need to be educated and undertook the task of educating his young bride. How Anandibai came to study medicine may have influenced from a personal tragedy. Within a couple of years of her marriage Anandibai gave birth to a young baby boy, but tragically lost him within a few days of his birth. If only Anandibai had access to better medical facilities she may have been able to save her son. But that was not the case. Perhaps it was this personal loss of her young baby that inspired Anandibai to study medicine and specialize in obstetrics.
By the time she was 18 years Anandibai had been home schooled and was fluent in English and grammar as this letter highlights. Around this time Gopalrao had gotten in touch with Royal Wilder, an American missionary living in Princeton, New Jersey. Wilder was an old India man, and one of the early American missionaries to work in India. He came to India sometime in 1846 along with his wife and raised a family there. He worked mostly around Kolhapur area in Maharashtra for close to three decades before returning to the USA and founding “The Missionary Review” in Princeton. Wilder was the person who helped Anandibai and wrote about her desire to study in the US in his magazine, which in turn was read by Theodocia Carpenter, who eventually became the surrogate family for Anandibai during her stay in the US.
Through the efforts of Mrs. Carpenter and other Americans Anandibai was admitted to study medicine at the Women’s Medical College of Pennsylvania. This was the first medical college for women in the world and was established in 1850 and is today part of the Drexel University, College of Medicine.

When Anandibai arrived by ship to the US she was received by Mrs. Carpenter, 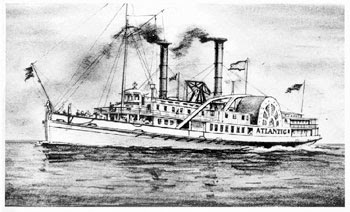 Many of the overloaded ship's immigrant passengers slept on the deck, as there was no room below.

who continued to be in constant contact with the young Indian student. Anandibai sent long letters to her husband about her stay in the USA. It must have been a challenging experience considering that Anandibai adhered to a strict vegetarian diet and was not used to the brutal cold weather on the East Coast. During her last few months of her stay in the US she contracted tuberculosis. In spite of various challenges, Anandibai appears to have bravely endured the hardship and novelty of living in America and successfully completed her medical education. Interestingly Anandibai’s research thesis was Obstetrics among the Aryan Hindoos (see the image). For her graduation ceremony Anandibai invited her friend Pandita Ramabai, and this is confirmed by Max Mueller in his book Auld Lang Syne. Second Series. My Indian Friends.

On March 11, 1886 Anandibai received her degree in medicine, and instead of staying back in the US, she went back to India with her husband, who had come to accompany her back for the trip. In an interesting twist Anandibai went back to work in Kolhapur, the same are where Wilder had worked as a missionary during his 30 year stay in India. But, within months of her return Anandibai succumbed to tuberculosis and died. Her ashes were sent to Mrs. Carpenter, who erected a tombstone for Anandibai in her family burial plot in Poughkeepsie, New York.
When she was exploring her options to study in American she was often asked if she would convert to Christianity, a suggestion she resisted. Perhaps that might explain the reason why the epitaph on her American tombstone reads: “First Brahmin woman to leave India and obtain an education.”
Sadly, one of the unintended consequences of Anandibai’s progressive education was the change that it brought about in her reform-minded husband. While she was adjusting to her new life in America and putting up a brave face her husband appears to have developed a certain amount of resentment towards her progress.
Anandibai’s pathbreaking education did not go unnoticed. In 1886 Carolina Dall wrote a book on “Life of Dr. Anandbai Joshee.” where she outlined in great detail about the Anandibai and her life in the USA.
Thanks to Dr. Ashok Gore in Southern California for sharing the information and pictures and images related to Anandibai Joshee. Dr. Gore was kind enough to let me leaf through an old and well-preserved copy of Life of Dr. Anandibai Joshee written by Caroline Dall in the late 19th century. Mrs. Dall was one of the first people to write extensively about Anandibai. The book appears to have got quite a bit  of publicity including this one-line description from The Nation in 1888. The proceeds from the sale of the book was to benefit Pandita Ramabai’s school fund. The book is a treasure trove that contains all kinds of information about the first Indian woman to study medicine in the USA. Dr. Gore has been tirelessly working on collecting and spreading awareness about Anandibai Joshee for nearly 25 years.