6,000 CCTV cameras across the city. delay

1
comments
0
inShare
Share More
A
A
MUMBAI: The Maharashtra government has seized the security deposit of the contractor who cheated it into accepting a false financial instrument for the CCTV surveillance network project in Mumbai. It no longer wants to file an FIR against the contractor since the management is "untraceable".

Sai InfoTech Systems had submitted a cheque of over Rs 2 crore as deposit for a bank guarantee after reaching an agreement with the state. But the cheque bounced, prompting the government to contemplate, for a while, action under section 138 of the Negotiable Instruments Act.

"At present, the case does not merit an FIR under the Negotiable Instruments Act, so we have seized the security deposit. We think it is better to channel our energies on negotiating with the second bidder, instead of going after this contractor," said a senior home department official.

Chief minister Prithviraj Chavan had hinted in the ongoing assembly session that the CCTV project's fate hangs in the balance. The government is now looking to explore an alternative model, preferably along the lines of the one being adopted in Delhi.

In the interim, it is negotiating with the second bidder, AGC, which submitted an offer of around Rs 1,000 crore for the estimated Rs 864-crore CCTV surveillance cover for Mumbai. Sai InfoTech Systems "under-quoted the bid at Rs 700 crore," officials said. 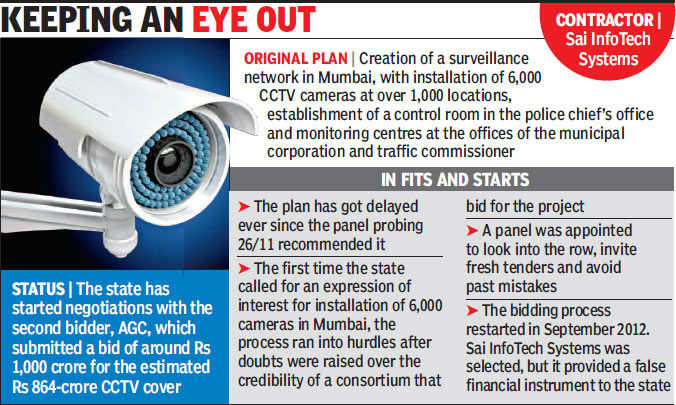 This was the second time the government had called tenders for the installation of 6,000 CCTV cameras across the city. Experts believe the delay in the project's implementation, coupled with inflation, is bound to escalate costs. Potential bidders were concerned about the limitation of liability as there is an unspecified quantum of penalty for not meeting service level agreements. The project is considered difficult to execute because it requires skills related to information technology, telecom, infrastructure and project management, said officials, while adding that several clauses have restricted the participation of telecom companies.