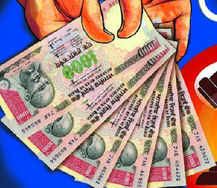 Under the Debt Waiver and Debt Relief Scheme, 2008, the Centre had waived off around Rs 60,000 crore to farmers.

"In the last 13 years, banks have written off 1 lakh crore and 95% of these are large loans. Everyone talks of the farm loan write-off, but it is the medium and large enterprises segment that has a 50% share in NPAs," said Chakrabarty.

The deputy governor flayed banks for using 'technical write-offs' to reduce their non-performing assets (bad loans) over the years. Technical write-off is a process adopted by banks whereby they take a hit on their profits and stop including the defaulting loan in the list of those from whom repayments are due. It is called a technical write-off because although banks do not show these loans as receivables in their books, they continue to pursue recovery in courts or other forum.

A technical write-off enables banks to claim that they do not have any bad loans on their books by fully providing for the loans from their earnings. It also reduces their tax outgo.

Chakrabarty also raised the issue of restructured loans—advances where potential defaulters are given more time to repay without being called defaulters. "Restructuring of loans with retrospective effect has killed credit quality in banks," he said. He warned banks that the leeway might not be available in future.

RBI numbers showed that the banks added Rs 4,94,836 crore to their bad loans between 2007 and 2013. During the same period, they reduced NPAs to the extent of Rs 3,50,332 crore. This was possible because loans worth Rs 1,41,295 crore were written off and another Rs 90,887 crore were upgraded to repaying loans and Rs 1,18,149 crore was recovered from defaulters. According to Chakrabarty, after a technical write-off, there is no incentive to pursue recovery.

The deputy governor said that in the case of large loans, there is no one who is accountable for monitoring the loan, as these are sanctioned by the board or a committee. "Between 2007-13, credit to 10 large corporate groups has more than doubled. We have seen that wherever credit growth has been higher, NPAs are also higher."

Ranbaxy fined $ 500 mn for selling adulterated drugs made in India

ibnlive.in.com › Business‎
May 14, 2013 - Generic drugmaker Ranbaxy has been fined \$500 million by the US government after its subsidiary pleaded guilty to sale of adulterated drugs ...

www.bbc.co.uk/news/world-asia-india-22520953‎
May 14, 2013 - India's top drugmaker Ranbaxy Laboratories will pay a record fine in the US for lying to officials and selling badly made generic drugs.
About 35,900,000 results

en.wikipedia.org/wiki/Mining_scams_in_India‎
Jump to Illegal mining in Goa - [edit]. The Shah Commission report on mining in Goa has accused both the state and the Union Ministry of Environment ...

rediff.com: Hawkers: S Gurumurthy on the warpath against Reliance ...

defenceforumindia.com › ... › Indian Affairs › Economy & Infrastructure‎
Nov 2, 2012 - 11 posts - ‎4 authors
And unlike other exposes by Kejriwal, the controversy surrounding Reliance's ... Indian Express and Arun Shourie (who later started seeing Reliance through ... In 2009, India's stock market regulator started investigating whether ... Half a century later, he would become chairman of a company that owned ...

www.livemint.com/.../SBI-results-show-sharp-deterioration-in-health-of-...‎
Aug 12, 2013 - The continuing contraction in manufacturing indicates that the situation will likely get worse, leading to more bad loans.

www.dnaindia.com › India‎
Aug 29, 2013 - India has been rocked by a spate of scams in the recent past. ... Better known as Choppergate, the scam involves several politicians and defence ... who were responsible for a controversial contract between Antrix Corporation and .... to trusts from mining companies in exchange for issuing mining leases.

www.livemint.com/Companies/.../India-grants-mining-lease-to-ArcelorM...‎
Brussels: ArcelorMittal, the world's largest steelmaker, said it had been granted a mining lease to secure iron ore for a steel plant it is building in the Indian ...