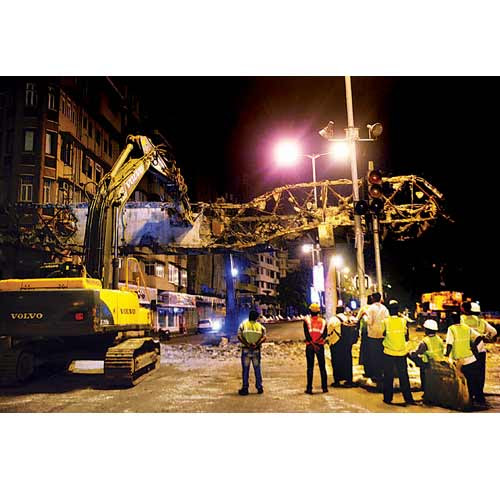 The remaining portion will be demolished by Monday.

Civic officials have planned the demolition of the bridge over two consecutive days, beginning Saturday, between 10pm and 6am, and traffic on the road has been diverted to other roads.

dna on August 8 had reported about the traffic police giving its go-ahead to the Brihanmumbai Municipal Corporation (BMC) to carry out the demolition of the FOB. “We demolished the portion of the FOB above the road on Saturday night. The part with the staircase will be demolished tonight (Sunday night to Monday morning),” said SO Kori, chief of BMC’s bridges department.

Kori added that although the BMC had decided to demolish this FOB, it is yet to take a decision on whether to replace it with another one or construct a subway as has been suggested by the Mumbai Metropolitan Region Development Authority.

The reconstruction of the FOB is part of the BMC’s plan to review and rework the city’s 261 bridges that include road overbridges, skywalks and foot overbridges.

Civic officials said the FOB was built in 1953 by the Patel Trust and the escalator, which was installed in the 1970s, is believed to be the first in India in a public place.

“To demolish the bridge, we are using the same technique that was used to bring down the Lalbaug flyover in 2009,” said a senior official. He added that a combi crusher is being used for the demolition as it operates with minimum noise.