Mumbai Monorail is running a loss of Rs. 1.5 crore every month 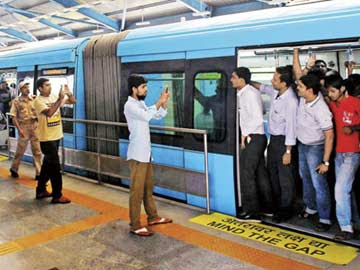 Monorail had a good beginning 4,58,871 passengers travelled in the first month, generating Rs. 44,66,522 in revenue. It is expected that number of travellers will be lesser in March, as the novelty will have waned.
Mumbai:  The Mumbai Metropolitan Region Development Authority (MMRDA) may claim that the Wadala-Chembur Monorail corridor is getting a good response, but the numbers reveal that the line is operating at a loss.

While tickets rake in Rs. 2 lakh every day, it takes Rs. 7 lakh per day to operate the Monorail. That's a loss of Rs. 5 lakh per day, which works out to Rs. 1.5 crore a month.

Confirming the numbers, a senior MMRDA official said, "Even though there has been a good response to the Monorail since its inauguration, we operate at a loss of around Rs. 5 lakh per day and Rs. 1.5 crore per month."

After Chief Minister Prithviraj Chavan inaugurated the line in February, the initial rush meant people had to stand in queues to get tickets. However, the curiosity seems to have reduced.

A major portion of the operating costs Rs. 1 crore a month goes towards paying the guards of the Maharashtra State Security Corporation (MSSC).

Around 500 such guards (male and female) are stationed on the premises of the Monorail stations. Every single trip costs the MMRDA Rs. 3,500 this includes maintenance, electricity, security etc.

At present, the Monorail operates from 7 am to 3 pm. Officials will extend the timing to 8 pm, making it a total of 80 trips per day, in order to squeeze in some extra earnings. However, this isn't expected to make much of a difference.

Metropolitan Commissioner UPS Madan said, "At present, the cost of Monorail operations per day is more than the amount we get from fare collection. But we expect that there will be good revenue generation once the entire Jacob Circle-Wadala-Chembur line is operational."

This paper had reported in May, 2012 that commuters doubted the utility of the Wadala-Chembur corridor, since it passes through isolated locations and doesn't have a significant residential population. But MMRDA officials are confident that the Jacob Circle-Wadala corridor will be operational by mid-2015.

Rs. 7 lakh
Operational cost per day of the Monorail

Rs. 1 crore
Amount MMRDA has to pay to the MSSC per month for security services