a streamline narrow-gauge steam locomotive No. 5343. It belonged to quite unremarkable C53 class of Japanese Government Railways (today JNR), built by Kisha-Seizo and Kawasaki Works for 1,067mm gauge. From 1928 through 1931, 97 C53s entered service.

Nothing special, as you see - just a diminutive version of the Pacific (with 4-6-2 wheel arrangement), so popular in the Interbellum years.

Only one C53 was fitted with streamline shrouding in the mid-'30s.

This machine was quite slow, achieving top speed of only 95 km/h. But who cares for performance when you've got the looks?

The 5343 lost its shrouding and then went to the scrappers (its non-streamline "brother", the 5345, is preserved at the Umekoji Steam Locomotive Museum). Nowadays it became the railway modelists' darling:

They were soon reverted to a "conventional" form. I could not found a photograph of C55 streamliner, but there are models:

A single railcar that started a new era:

It is Pullman-Standard Railplane, designed by William Stout (who is also responsible for the famous Stout Scarab minivan and well-forgotten Scarab bus).
Feeling the effects of the Depression and declining business, America's railroads (in the 1930s) were looking for ways to reinvigorate passenger travel. As Ralph Budd, president of the Chicago Burlington & Quincy, later explained, railroads had to continue running trains on short routes to handle mail and baggage "whether or not anyone rides the trains." After seeing GM's powerful diesel engines, Budd concluded that what the railroads needed was a new kind of train that was fast, convenient, ultramodern and luxurious enough to fire the public imagination. The Union Pacific Railroad also saw the two exhibits and came to similar conclusions. A race was on to see which of the two railroads would be the first to develop an ultramodern diesel passenger train.

With the engine technology of the day, the new trains had to be lightweight. To get the most out of the available power, the trains were streamlined. The Union Pacific selected the University of Michigan to find the best aerodynamic shape while CB&Q turned to M.I.T.. The new designs looked like nothing else that had ridden the rails. They looked more like Buck Rogers's space ship than a train. People were tired of living in the Depression and they were ready for a change. These radical new designs, no doubt, capitalized on it.

In 1933, the Pullman Car & Manufacturing Company constructed the Railplane to Stout's design (some improvements were later patented by the company, see the positives below). This was merely Stout's familiar triangulated space-frame aircraft fuselage, this time adapted to railroad use. Here too, he was able to preserve his all-time important triumvirate: simplicity, practicality and comfort. 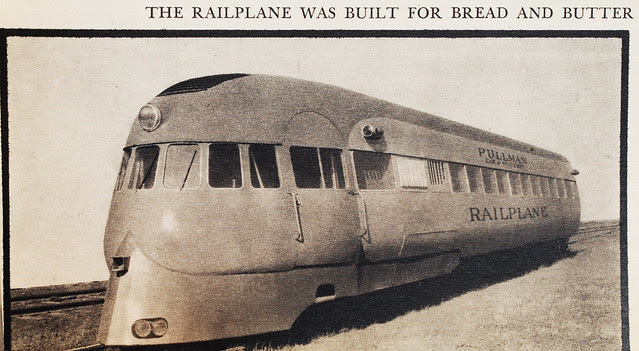 The self-propelled car had an aluminum body, 60' in length. It was exhibited at the Chicago World's fair 1934 and then leased to the Gulf, Mobile & Northern in 1935 for service between Tylertown and Jackson, Mississippi. The Railplane is principally known as a test vehicle although it saw some small commercial service.

It weighed 20 per cent as much as a conventional railroad car, but using only two minuscule (by railroad standards) 320-hp six-cylinder truck engines, was able to hit 100 miles per hour, while delivering 5 miles per gallon. The secrets were streamlining and weight. The entire Railplane weighed little more than a single four-wheel suspension "truck" of a standard railcar. By comparison, two men could lift the space-frame "truck" from the Railplane, and Stout found it necessary to mount the engines - one to each truck - directly to the carriers thereby increasing unsprung weight for acceptable ride.

By comparison to conventional railcars, the ride was superb, engine noise and fumes were all but eliminated and the seating arrangement - using aircraft-type seats as fitted to the Scarab automobile - made the Railplane quite luxurious.

From the railroad point of view, all running gear could be easily serviced from outside, tracks and roadbed lasted longer and operating costs were significantly less. Despite proven advantages, there were no buyers. Union Pacific ordered a three-car version (future City of Salina) , but that's as far as it went.

Like the Railplane, the UP train was constructed out of aluminum. In the other corner, CB&Q looked to a new comer on the railcar scene, Edward G. Budd Manufacturing Company (no relationship to Ralph Budd). Budd had been producing auto-bodies before the Great Depression; however, with business down, they decided to diversify and construct a light weight, stainless steel railcar. They finished their first coach in 1932. The stainless steel coach was made possible because the Budd Manufacturing Co. had developed the first successful method of welding stainless steel only a few years earlier. 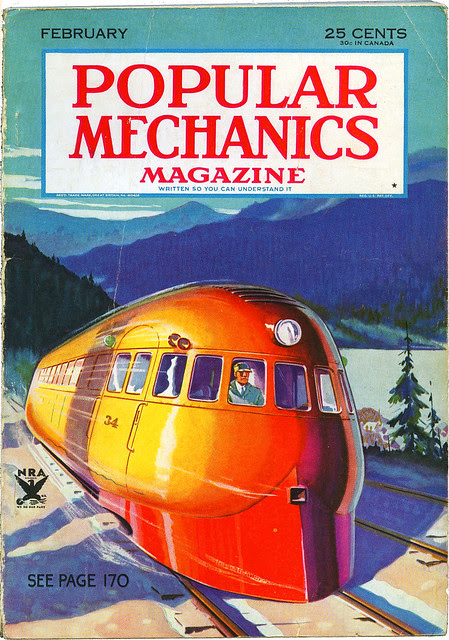 
A class of six Atlantics (Class 12) was introduced in May 1939 by SNCB, the state Belgian railways, to haul trains from Brussels to Ostend – 70.8 miles – in one hour exactly, with a 60 second stop in Bruges.

They were designed by Raoul Notesse and modeled after 4-4-4 Canadian Pacific locomotives (minus one axle). Mr. Notesse delivered a light, sound and rather conservative design, mostly ignoring American and French innovations of the time.

Their casing has been obviously inspired by British 'baby whale' streamliners of the London Midland and Scottish Railway, except for the addition of huge smoke deflectors. The front part opened like a gate (or closet doors), simplifying maintenance.

Belgian Atlantics were fast. Different sources claim different top speed (140, 165 and even 195 km/h) but their documented "commercial" speed was remarkable for the time: 121 km/h.

Serving on Brussels - Ostend mainline, they were fine companions to Belgian diesel ferries that sailed across the Channel.

Little is known of their fate during WWII, but all six Class 12 Atlantics were in service in 1964 and four continued to operate until September 27, 1962, hauling short passenger trains between Brussels, Liege, Herbesthal and Lille.

One of them, 12.004, is preserved in Louvain. Restored in 1980s, it soon needed another restoration. Judging on the photographs made last year, it is in good (though probably not in fully working) condition.

Now, as usual, some models:

The streamlined Art Deco styled shell of the locomotive was designed by Raymond Loewy. In 1937, Pennsylvania Railroad officials decided to build a new passenger locomotive to replace its aging K4s locomotive. The PRR officials also hoped that the new S1 steam locomotive would have performance equal to their GG1 electric locomotive.

The S1 was the only locomotive ever built to use a 6-4-4-6 wheel arrangement. Also, the S1 class was a duplex locomotive, meaning that it had two pairs of cylinders, each driving two pairs of driving wheels. Unlike similar-looking articulated locomotive designs, the driven wheelbase of the S1 was rigid.

The S1 was completed January 31, 1939 and was assigned locomotive number 6100. It was the largest express passenger locomotive ever constructed, with an overall length was 140 feet 2½ inches (42.74 m). At 77 feet (23 m) long and a weight of 97,600 pounds (44.3 t), the cast steel locomotive bed plate made by General Steel Castings was the largest single-piece casting ever made for a locomotive application.

The boiler unit for the S1 was the largest built by the Pennsylvania Railroad. The six-wheel leading and trailing trucks were added, as the locomotive's design became too heavy for four-wheel units. However, the locomotive was still overweight by a significant margin. The streamlined Art Deco styled shell of the locomotive was designed by Raymond Loewy, for which he received U.S. Patent No. 2,128,490. The final construction cost for the S1 was $669,780.00.

The S1 was displayed at the New York World's Fair of 1939 with the lettering "American Railroads" rather than "Pennsylvania Railroad", as 27 eastern railroads had one combined 17-acre (6.9 ha) exhibit, which also included the Baltimore & Ohio's duplex locomotive. To reach the New York World's Fair, the S1 took a circuitous route over the Long Island Rail Road. Many obstacles had to be temporarily removed and other obstacles were passed at a slow crawl to reach the fairgrounds.

At the World's Fair the S1 was a dynamic display; the drive wheels operated under the locomotive's own steam power. This was done by placing the S1 on a platform that had rollers under the drive wheels. By using this type of display, visitors could see the duplex drive in use.

After the World's Fair, the S1 was relettered and numbered for use in the Pennsylvania Railroad fleet. The S1 was used by the PRR for publicity purposes as well and its image was featured in calendars and brochures.

The S1 class locomotive was so large that it could not negotiate the track clearances on most of the lines of the PRR system. In its brief service life it was restricted to the main line between Chicago, Illinois and Crestline, Ohio. It was assigned to the Fort Wayne Division and based at the Crestline enginehouse.

The S1 hauled passenger trains such as The General and The Trailblazer on this route. Crews liked the S1, partly because of its very smooth ride. The great mass and inertia of the locomotive soaked up the bumps and the surging often experienced with duplex locomotives.

It was hoped that the locomotive could haul 1,000 tons at 100 miles per hour, but this goal was not reached. There are apocryphal stories of the S1 reaching or exceeding 140 miles per hour, but there is no documentation of this and it is considered unlikely by experts.[7] Its high speed capability was such that some have claimed the S1 may have even exceeded the 126 mph (203 km/h) record steam locomotive speed set in 1938 by the LNER locomotive Mallard. The locomotive was also rumoured to have operated at speeds exceeding 156 mph on the Fort Wayne-Chicago Railroad, as it was rumoured that the PRR received a fine posted by an interlocking tower on the division, proving the claim. However, it appears that no verifiable records are available to authenticate the claims.

Wikipedia article contains a special and rather lengthy Design Flaws section. I'd better turn to another source: Wes Barris' Steam Locomotive website. "While being an impressive puller, - Wes writes, - the 6100 turned out to be too long for most of the PRR trackage and turntables. It ended up in service only between Chicago and Crestline, OH. Even so, the 6100 proved to be both a public relations success <...> as well as a great learning tool for the T-1s that would be designed later.

6100 was taken out of service in 1944 (after only four years of service) and scrapped in 1949. To really appreciate how long this locomotive was, you must first have a frame of reference. Consider the Big Boy. The Big Boy was generally considered to be the "largest" steam locomotive ever. It was over 132 feet long. Unlike the Big Boy, the S-1 was not an articulated locomotive, yet, it was a whopping 140 feet long! I don't know what its designers were thinking, but the length of this locomotive was partly to blame for its failure. "

What can I add? Streamline steam locomotives of the Diesel Era are so confusing: they are running on "old" power but their looks are ultramodern. So if a thing like the Ultimate Dieselpunk Steam Loco is not 100 per cent absurd, it must be the PRR 6100.