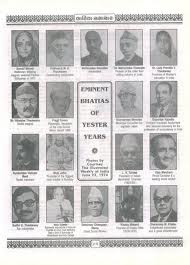 Shri Mansingh L. Bhakta is a Director of the Company since September 27, 1977. He is a Senior Partner of Messers Kanga & Company, a leading firm of Advocates and Solicitors in Mumbai. He has been in practice for over 51 years and has vast experience in the legal field and particularly on matters relating to corporate laws, banking and taxation.

Shri Bhakta is the legal advisor to leading foreign and Indian companies and banks. He has also been associated with a large number of Euro issues made by Indian companies. He was the Chairman of the Taxation Law Standing Committee of LAWASIA, an Association of Lawyers of Asia and Pacific which has its headquarters in Australia.

Shri Bhakta is a Director of Ambuja Cements Limited, Micro Inks Limited, The Indian Merchant's Chamber, Mumbai, JCB Manufacturing Limited, JCB India Limited and Lodha Developers Limited. He is the Lead Independent Director of the Company. He is the Chairman of the Shareholders'/ Investors' Grievance Committee and the Remuneration Committee of the Company. He is the Chairman of the Audit Committee, the Shareholders' / Investors' Grievance Committee, the Compensation and Remuneration Committee and the Banking Matters Committee of Ambuja Cements Limited and a member of the Audit Committees of Micro Inks Limited and JCB India Limited. He is Recipient of Rotary Centennial Service Award for Professional Excellence from Rotary International. He has been listed as one of the Leading Lawyers of Asia by Asialaw, Hongkong for the fourth consecutive year from 2006.......... 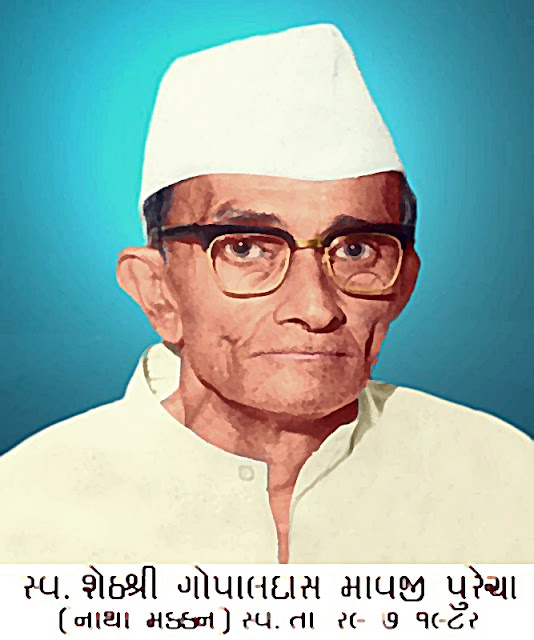 Many people came together to fight for the country’s independence. However, not much has been written about them. Gopaldas Purecha also fought for the uplift of the socio-economic standard of Indian people by pioneering the Non-Cooperation Movement and Quit India Moment. However, his contribution during the freedom struggle is not to be missed.  Gujarat - Kutch Mandvi -based Gopaldas Mavji Purecha's Childhood Name Among Community was Kaku Bhai, who fought to secure India’s freedom, died at age of 68 on July 29, 1982. Gopaldas also known as Manvendranath Azad also Kakubhai Bhatia was a part of Mahatma Gandhi’s Quit India Movement in 1942. His family believes that even after his death, Gopaldas’s ideologies and thoughts continue to remain alive in their hearts.

Gopaldas was born in Kuchh Mandvi,Purecha Dello,Sachalo Falio,Near Vegitable Market, in 1914. Without a single clue what future holds for him, at the age of 18, Gopaldas traveled to Darwha Moti Bagh Junction railway station, which is a small railway station in Yavatmal district in the Indian state of Maharashtra. He came here to provide support to his Father Mavji Virji Purecha and elder brother Mr.Morarji Mavji Purecha for Family Bussness M/s.Laxmidas Gopaldas & Sons. After some years he moved to Mumbai to earn a living. Pravin Purecha, his son, recalled, “He was only 20 when he came to Mumbai. In 1932, Gandhi had organised a rally which he attended. After listening to Gandhi’s ideologies, my father was left impressed and decided to join the struggle to secure the country’s freedom.”

The Government of Maharashtra in recognition of his Services as Freedom Fighter, suo moto, included his Name in Prestigious List of Freedom Fighters. At the age of 26, he took part in Quit India Movement with Dr.Amul Desai (Nephew of Ex.Prime Minister Late Morarji Desai) from Pune "Nivritee Banglow" (Family Resident) they planted bomb in Military Camp Pune, British Police got a key clue that two Khaadi Dress Wala, by Loacal Loundry Man and arrested  by British Police and were convicted by court. After he took active part in Quit India Movement, he avoided arrest and since then worked underground. Was responsible for various activities, which sustained and maintained Quit India Movement for years together i.e. in the year 1942-43. His contribution to the National Movement now gets recognition from the Government of Maharashtra, when Government included his name in a prestigious list of Freedom Fighters, Tamra Patra And SILVER MEDAL also given by Ex prime Minister Mrs.INDIRA GANDHI in 1972 at Sannmukhananda Hall MUMBAI. Without any request or application, and has also granted Pension to him. But he refused to take pension from the government’.

Gopaldas Purecha participated in several movements like he Non-Cooperation Movement was a significant phase of the Indian independence movement from British rule.... It aimed to resist British rule in India through nonviolent means,"satyagraha"....Non Coparation, but the remarkable one was when he planted a bomb in Pune’s military camp. Pravin said, “They wanted to send across a message to the Britishers so they planted a bomb in Pune. After the plan was executed, they were hiding from the British policemen. However, they managed to capture my father in 1942. He was later sent to Yerwada Jail of Pune where he accompanied Gandhi.Manvendranath Azad Name Given by Mahatma Gandhi at 1942 in Yarwada Jail Pune.”

He was in the prison for nearly 14 months along with Morarji Desai, Amol Desai, Dinkar Sakharikar, Mr.Waradkar, Dattarey Mahadev Angare,Gulab Gawand,Tabji Bhai Solanki and Dada Dharmadhikari. After his release, he returned to Mumbai.”

In 1972, Indira Gandhi had felicitated several freedom fighters and offered Life time Pension for all Freedom Fighters to financial help. However, Pravin recalled that his father politely refused everything. “He always said that he fought for the country and that he didn’t need money in return. He even denied pension provided by the government,” said the proud son.

Gopaldas Mavji Purecha was born on the Diwali Dhan Teras Day on the 16th October 1914 and passed away on the 29th July 1982. He was a major influence on our lives. He studied at in Kutch Mandvi.After he join his father`s firm M/s.Gopaldas Laxmidas & sons..State Maharashtra,Region Vidarbha District Yawatmal Dist.Dharwa-.his mother in Kutch with his youngest brothers Mulraj and Babu @ Laxmidas. Later, he joined firm Oriental Mills Bombay.T hen after sum Month He started a partnership firm of Destember coulors in Thane- Mumbai. Only three years later with havy loss in Bussines he Joined Mafatlal Mills and married Gunvanti, daughter of Bhatia Leeladhar Baba seth Anand.(Dharan Gaon). He then became the manager of Mafatlal Mill-Mumbai. His reputation grew and he was regarded as an able manager and also a good Coardinater of the Sadguru Seva Sangh.a Relief Missionery. He was totally in-charge of Shri Sadguru Seva Sangh Trust From 1968 to 1978, is primarily a Social Service organization, established in 1968 by Param Pujya Gurudev, Late Shri Ranchhoddasji Maharaj, with the sole objective of selfless..

After the freedom struggle, Gopaldas continued to do social work and served the citizens.