By Linah Baliga, Mumbai Mirror | Updated: Aug 14, 2018, 09:01 IST
Only a few families from the Goregaon project now live in Mumbai, many left due to exorbitant rent (PHOTO BY NILESH WAIRKAR)
A year after HC’s demolition order, BMC plagued with inaction; pleads lack of skilled labour.

Ten years after redevelopment of a building in Goregaon West, 18 families cannot take possession of their flats as the builder went against the BMC’s plan and built ten additional illegal floors. The families from Deshabhimani Co-operative Housing Society (CHS) near Shreenagar Estate in the suburb are still waiting for the civic body to demolish the unauthorised construction of 6th to 15th floors as per the Bombay High Court order of July 11, 2017.

While 12 senior citizens passed away awaiting possession, many others found city rentals beyond their means and moved away. Three weeks after moving to Kollam, Kerala in January, Bipin Nair lost his mother Bhagheerathi, 89, and brother Shree Kumar, 64.

“They passed away within a span of one week. My mother was the owner of the flat and a resident of the society since 1968. In 2008, she and my brother vacated the flat and lived in a rented apartment for which the builder paid Rs 25,000 as rent. They had to move out of that flat in 2013 when the builder stopped paying the rent, as it had gone up to Rs 30,000 per month,” Nair told Mirror, adding that his mother was a pensioner and his brother couldn’t afford the rent either. “My mother was depressed as the home built 45 years ago by my father had been taken away,” he said, adding that the flat is now worth Rs 2 crore but no one is doing anything to give the houses back. 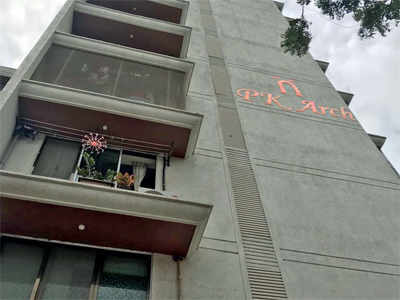 Like Nair, Vinod Pillai, secretary of Deshabhimani CHS also moved to Kerala with his family. “Initially, we stayed in Goregaon. After the builder stopped paying the rent, we went to Mira Road and then eventually moved to Kerala. In 2011, the BMC had asked the builder to cough up Rs 8.6 crore to regularise the unauthorised floors. The builder moved Supreme Court stating that the penalty was exorbitant. The court ruled in BMC’s favour,” said Pillai.

“One of the officials from the BMC’s building and factories department said that they were to call for a tender but their computer systems crashed and, with it, their allocated budget for demolishing the structure lapsed. It seems the BMC is working for the builder,” said Pillai.

“I have to invite tenders for demolition and need skilled labour for it,” Chanda Jadhav, assistant commissioner, P-South Ward, told Mirror. BJP’s Sandeep Patel, ward committee chairman, who is looking into the issue, said that the society will be forced to file a contempt petition against the BMC as it has been a year since the HC’s order.