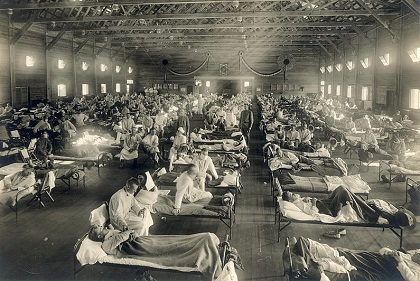 It was when the virus underwent a sudden mutation in its antigenic nature[7] that the Pandemic left its mark on global and Indian demographics – this time among the most productive age group of 20-40 year olds. In India, the mortality among young women in the reproductive age group was particularly high, resulting in a 30% drop in the birth rate for the year 1919.[8]

Most documented epidemics have tended to originate in the Eurasian landmass and moved from east to west. Unusually, the Spanish Flu originated in the West. Paul Kupperberg in The Influenza Pandemic of 1918-1919 (2008),[9] says a country physician in rural Kansas (U.S.) first raised a warning about “an influenza of a violent nature” in late January 1918, with the then U.S. Public Health Department. But to no avail. With the war on-going and American soldiers criss-crossing their country through military training camps and then embarking for the war front in Europe, it was inevitable that the violent flu spread in the US before it made landfall in France in April. From France, it travelled outwards through land and sea routes across Europe, Asia, Africa, Australia, New Zealand and the Pacific islands. The tiny island nation of Samoa lost half its population to this pandemic.

The moniker ‘Spanish Flu” was given to this virus through a far-fetched, specious connection. Neutral Spain wasn’t the country of origin for this H1N1 virus subtype. But it devastated the Spanish population and its wide reportage by the Spanish press gave it the name.

The extensive coverage in Spain was in stark contrast to the censored reportage among the warring nations which didn’t want a public panic. European newspaper headlines of the time took advantage of this fact and went a step further with the tongue-in-cheek name “Spanish Lady”. Flu victims were deemed to have had a visitation by the Spanish Lady.

But the first wave that had spread across the world by June 1918, was only the aperitif.

It was the second or Autumnal Wave, a mutated virus, that was the main course and killed millions in just four months, starting in September 1918. Most medical historians[10] agree that there were three Atlantic ports thousands of miles apart from each other – Freetown (Sierra Leone), Brest (France) and Boston (U.S.), which became the foci for the Spanish Flu’s explosive second wave. All three ports were active hubs for military transport ships[11], from where it was carried into British India’s Bombay Presidency (Bombay and Karachi ports) and from there inland by the railways to its Central and United Provinces, Punjab, Rajputana and Bengal Presidency.[12]

The trigger for the mutation of the virus is unclear. But such virus’ do mutate – often in the span of a few months – making them intractable enemies.

This is particularly relevant in today’s Covid-19 pandemic, as a vaccine created for a first wave virus may be ineffective against its mutated version. This is an historical warning that countries should not lower their guard even in the event of a vaccine coming out by early 2021.

The deadly second wave, from September to December 1918, was marked by a lack of effective, strong interventions by city governments across British India, in sharp contrast to the stringent protocols enforced by them during the Plague Epidemic 1896. This time it was the NGOs – both secular and community-based – which took the lead to help the afflicted poor. NGOs like the Social Service League,[13] raised money for nutritious food, clothing (pneumonia jackets), nursing and isolation in makeshift hospitals. Mobile fever clinics were also set up, very much like the ones set up by the Brihan Mumbai Municipal Corporation for Covid-19 in the city today.

Many reasons were given for this official inaction. One, was the scarcity of doctors because of their recruitment for war duty. The ones that remained themselves became incapacitated by the flu whilst working on the frontlines in city hospitals.[14] Villages on the other hand, did not even possess the luxury of a visiting medical doctor then.

The second wave also coincided with famine in provinces devasted by the flu — Bombay, Bengal, United and Central Provinces, Punjab, Rajputana — which resulted in a vicious cycle of starvation (due to high food inflation) and illness. This was worsened by exports of food grains for the War and supply chain impediments for imports.[15] It made the poor even more susceptible to the flu and led to a high inflow of famine migrants into cities, which in turn increased the death tolls in urban centers. Says Historian Dr. Mridula Ramanna, “For every 1,000 persons living between the ages of 20 and 40, 62 men and 79 women died. Mortality was estimated at 1,086,758 for the months of June to December 1918, taking excess of total mortality over the mean of the previous five years. The peak was reached in October.” And these over 1 million deaths were just for Bombay Presidency!

In the case of the 1918 Influenza pandemic, western medicine did not have a prophylactic (vaccine) or treatment for a viral infection, because medical breakthroughs at the turn of the 20th century were for bacterial infections.[16] The suddenness of death from high fever in influenza patients – often within four days—with a feeling of drowning in lung fluids, resulted in the first and only ever drop in India’s 20th century population growth in the 1921 Decennial Census. A conservative estimate placed influenza deaths at 12-13 million from September to December 1918. More recent studies give a higher bandwidth of up to 18.5 million persons.[17]

This is the highest and fastest death rate ever for any epidemic in India’s history. It far exceeds the 10 million deaths from the 1896 Plague which ran over two decades. Given this fact, the dearth of photographic and literary output on this most devastating of fevers is mystifying. Maybe it was the swiftness of death, the flu’s lack of physical aberrations like buboes in the Plague, its short spell – it had spent itself by December – and the dismal response by the colonial administration, which together made it just another blip in Colonial India’s cup of woes.

This article was exclusively written for Gateway House: Indian Council on Global Relations. You can read more exclusive content here.

For interview requests with the author, or for permission to republish, please contact outreach@gatewayhouse.in

[1] The Miasma Theory of disease originated in the Middle Ages and persisted till the late 19th century. After this the current Germ Theory of disease took precedence. Miasmas or poisonous vapours or mists made up of particles from decomposing organic matter giving out a foul smell were deemed the cause of numerous diseases particularly fevers. This theory led to wide-ranging sanitary reforms from the mid-19th century, which actually did go a long way in improving the lives of people.

[3] Historians studying the Influenza epidemic in India agree that unlike the plague, small-pox, cholera epidemics the Influenza of 1918 has hardly generated much documentation or literary works. Maybe a study of literary works in Indian languages such as Punjabi, Bengali and Hindi, would throw up more examples.

[4] Phillips Howard and David Killingray, Edited, The Spanish Influenza Epidemic of 1918–19: New Perspectives (London, Routledge, 2003). The introduction in this book sets out reasons why unlike other global pandemics the Influenza of 1918 was the least documented of epidemics globally. It is from the late 1970s that studies on this Pandemic gained momentum.

[6] The two worst hit cities were Bombay and Karachi both global transshipment ports, underscoring how hyper-connectivity through shipping routes carried this pandemic to every continent. In the case of SARS-Cov-19 it was air connectivity that led to outbreaks, for example in Milan (Italy), which had hosted Chinese buyers and investors for its Fashion Week just days before its epidemic began.

[7] Viral fevers are identified by a combination of the proteins H (Hemagglutinin) and N (Neuraminidase) on the surface of the virus. There are 16(H1 to H16) known types of hemagglutinin and 9 (N1 to N9) known types of neuraminidase, which gives 144 different possible combinations of these proteins. Studies by medical researchers and archaeo-serolists on tissues of those who died in the Influenza Pandemic of 1918, have revealed that the virus is similar to the swine flu virus. The current SARS-Cov-19 Pandemic’s zoonotic source is believed to be either the Pangolin or the bat.

[8] Mills, I.D., The 1918-1919 Influenza Pandemic – The Indian Experience, Indian Economic and Social History Review, 23 (1986), p. 32. The drop in births was not simply attributable to higher death rates among women but also to the fact of widespread widowhood.

[10] Patterson K. David, and Gerald F. Pyle, The Geography And Mortality Of The 1918 Influenza Pandemic, Bulletin of the History of Medicine, Vol. 65, No. 1 (1991), published by John Hopkins University.

[11] Fevers were not ‘notifiable’ diseases in British India, the Bombay Port Trust Health officer in spite of an earlier wave released overseas passengers into the city without due diligence. This lacuna was only addressed in 1919.

[12] Most historical studies only cover British India and not the Indian Princely States because of a lack of data in these kingdoms. This means that only 75% of the Indian Subcontinent’s population was covered by researchers

[13] In Bombay there were numerous social, political, business and community organizations that came forward to help the Bombay Municipal Corporation (BMC) after the Health Officer J.A. Turner appealed to the public for their help. Almost every community and caste organization came forward to help their people because of sensitivities regarding dietary strictures, concepts of pollution etc. that was prevalent then. Among political parties, the Home Rule League, played a significant role. Protocols regarding the working conditions in textile mills were recommended by the BMC’s medical sub-committee made up of Rahimtulla Currimbhoy, Dr. Kavasji Dadachanji, Sir Cowasji Jehangir and Dr. M.C. Javle. This was because mill-workers were found to be most susceptible. This model was replicated in Poona, Sholapur, Surat, Ahmedabad and Karachi, all in Bombay Presidency. Karachi city took this a step further by closing all theatres for 3 months.

[14] Arnold, David, Death and the Modern Empire: The 1918 Influenza Epidemic in India, Transactions of the Royal Historical Society (2018), p.192.  According to Arnold, the 700 doctors of the Indian Medical Service had been inducted into active military service, and by 1918 many had died and others had not reverted to their civilian posts yet. As a result, the doctors from the Royal Medical Armed Services, who attended to British officers and soldiers were pressed into service in local hospitals but they did not possess the language skills to help them deal with patients.

[15] Ramanna, Mridula, Coping with the influenza pandemic: The Bombay experience, in Phillips Howard and David Killingray, Edited, The Spanish Influenza Epidemic of 1918–19: New Perspectives (London, Routledge, 2003), p. 84. The scarcity of foodgrains was a contentious issue between the government and Indian leaders, and it was only as late as October 1918 that export of wheat was stopped.

[16] Numerous medical breakthroughs in the field of epidemic illnesses both in terms of vaccines, treatment protocols and sanitation had been made in India from the late 19th century. Some notable ones were Dr. Waldemar Haffkine discovery of the plague and cholera vaccines. Haffkine introduced a Cholera vaccine first in Calcutta after Dr. Alexander Yersin first identified its cause, also in Calcutta. By the time of the Influenza pandemic of 1918, almost six to seven international sanitation conferences had been held since the 1860s. However, all these discoveries and sanitation improvements were for bacterial infections.

Lessons from the Bombay Pl