A collect call , known as a reverse charge call , is a telephone call in which the calling party wants to place a call at the called party's expense. In the past, collect calls were only possible as an operator-assisted call, but with the introduction of computer-based telephone dialing equipment, it is now possible to place a collect call without using an operator,
Collect calling has been in constant decline since the advent of cellular phones and VOIP products such as Skype.

Underpaid letters are not delivered sometimes , they are returned to the sender.
many a time  it was paid by the receiver; if it was covered post ;in the belief it may be precious
many miserly(stingy) people used it as a way to save money 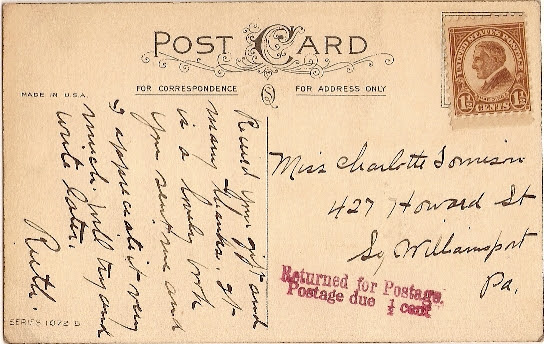 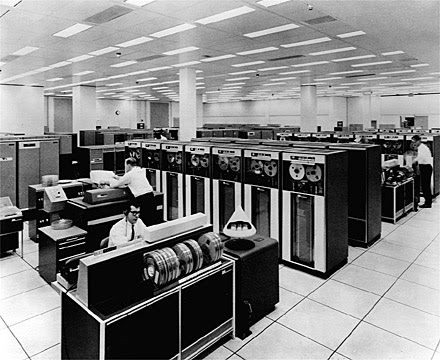 The IBM 7094, a typical mainframe computer [photo courtesy of IBM]

There were 2 ways to interact with a mainframe. The first was called time sharing because the computer gave each user a tiny sliver of time in a round-robin fashion. Perhaps 100 users would be simultaneously logged on, each typing on a teletype such as the following: 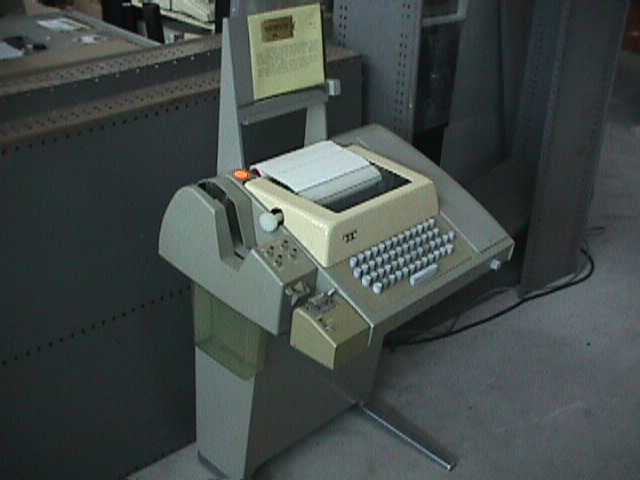 A teletype was a motorized typewriter that could transmit your keystrokes to the mainframe and then print the computer's response on its roll of paper. You typed a single line of text, hit the carriage return button, and waited for the teletype to begin noisily printing the computer's response (at a whopping 10 characters per second). On the left-hand side of the teletype in the prior picture you can observe a paper tape reader and writer (i.e., puncher). Here's a close-up of paper tape: 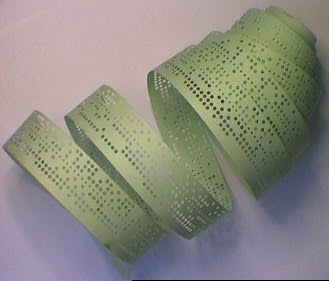 After observing the holes in paper tape it is perhaps obvious why all computers use binary numbers to represent data: a binary bit (that is, one digit of a binary number) can only have the value of 0 or 1 (just as a decimal digit can only have the value of 0 thru 9). Something which can only take two states is very easy to manufacture, control, and sense. In the case of paper tape, the hole has either been punched or it has not. Electro-mechanical computers such as the Mark I used relays to represent data because a relay (which is just a motor driven switch) can only be open or closed. The earliest all-electronic computers used vacuum tubes as switches: they too were either open or closed. Transistors replaced vacuum tubes because they too could act as switches but were smaller, cheaper, and consumed less power.
Paper tape has a long history as well. It was first used as an information storage medium by Sir Charles Wheatstone, who used it to store Morse code that was arriving via the newly invented telegraph (incidentally, Wheatstone was also the inventor of the accordion).
The alternative to time sharing was batch mode processing, where the computer gives its full attention to your program. In exchange for getting the computer's full attention at run-time, you had to agree to prepare your program off-line on a key punch machine which generated punch cards. 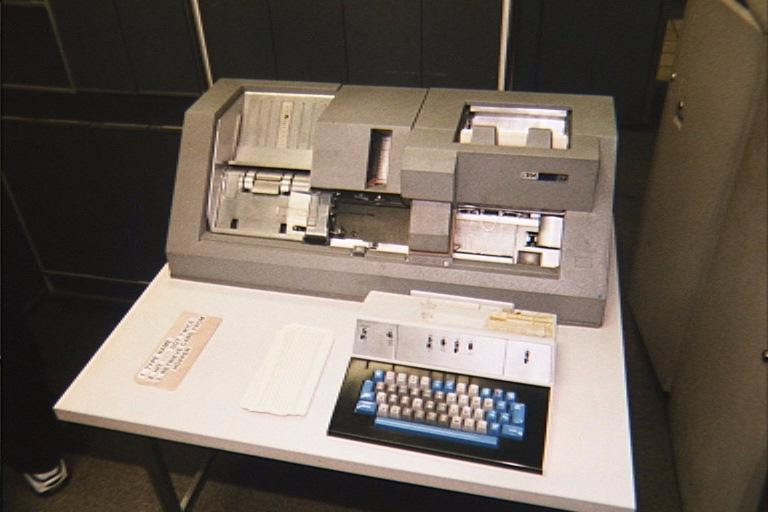 University students in the 1970's bought blank cards a linear foot at a time from the university bookstore. Each card could hold only 1 program statement. To submit your program to the mainframe, you placed your stack of cards in the hopper of a card reader. Your program would be run whenever the computer made it that far. You often submitted your deck and then went to dinner or to bed and came back later hoping to see a successful printout showing your results. Obviously, a program run in batch mode could not be interactive.
But things changed fast. By the 1990's a university student would typically own his own computer and have exclusive use of it in his dorm room. 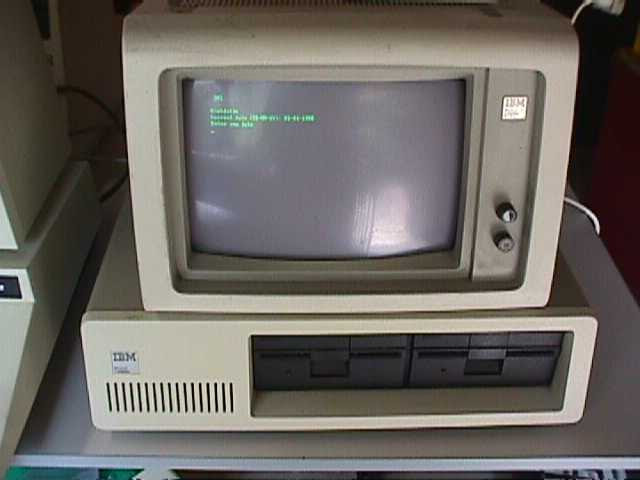 This transformation was a result of the invention of the microprocessor. A microprocessor (uP) is a computer that is fabricated on an integrated circuit (IC). Computers had been around for 20 years before the first microprocessor was developed at Intel in 1971. The micro in the name microprocessor refers to the physical size. Intel didn't invent the electronic computer. But they were the first to succeed in cramming an entire computer on a single chip (IC).

Intel was started in 1968 and initially produced only semiconductor memory (Intel invented both the DRAM and the EPROM, two memory technologies that are still going strong today). 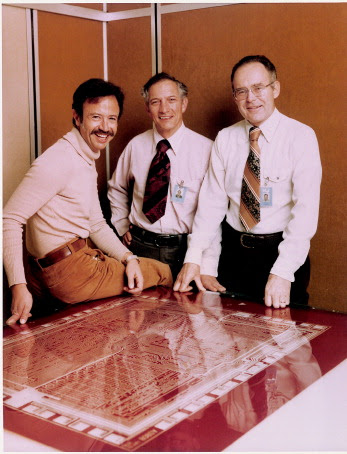 In 1969 they were approached by Busicom, a Japanese manufacturer of high performance calculators (these were typewriter sized units,

Photo of the original engineering prototype
of the Busicom desktop printing calculator.

the first shirt-pocket sized scientific calculator was the Hewlett-Packard HP35 introduced in 1972).

But integrated circuits were (and are) expensive to design and this approach would have required Busicom to bear the full expense of developing 12 new chips since these 12 chips would only be of use to them. 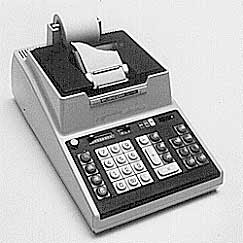 But a new Intel employee (Ted Hoff) convinced Busicom to instead accept a general purpose computer chip which, like all computers, could be reprogrammed for many different tasks (like controlling a keyboard, a display, a printer, etc.). Intel argued that since the chip could be reprogrammed for alternative purposes, the cost of developing it could be spread out over more users and hence would be less expensive to each user. The general purpose computer is adapted to each new purpose by writing a program which is a sequence of instructions stored in memory (which happened to be Intel's forte). Busicom agreed to pay Intel to design a general purpose chip and to get a price break since it would allow Intel to sell the resulting chip to others.

But development of the chip took longer than expected and Busicom pulled out of the project. Intel knew it had a winner by that point and gladly refunded all of Busicom's investment just to gain sole rights to the device which they finished on their own.
Thus became the Intel 4004, the first microprocessor (uP).


The 4004 consisted of 2300 transistors and was clocked at 108 kHz (i.e., 108,000 times per second). Compare this to the 42 million transistors and the 2 GHz clock rate (i.e., 2,000,000,000 times per second) used in a Pentium 4. One of Intel's 4004 chips still functions aboard the Pioneer 10 spacecraft, which is now the man-made object farthest from the earth.
Curiously, Busicom went bankrupt and never ended up using the ground-breaking microprocessor. 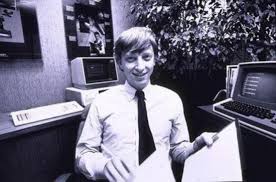 so he could concentrate all his time writing programs for this computer. This early experienced put Bill Gates in the right place at the right time once IBM decided to standardize on the Intel microprocessors for their line of PCs in 1981. The Intel Pentium 4 used in today's PCs is still compatible with the Intel 8088 used in IBM's first PC 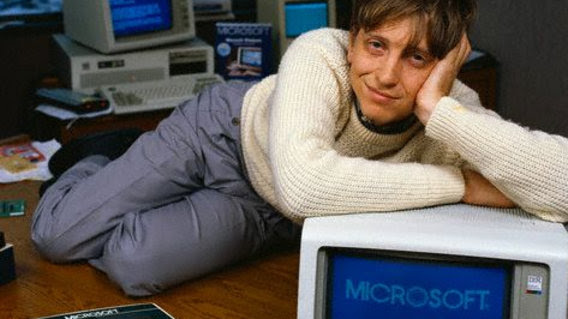