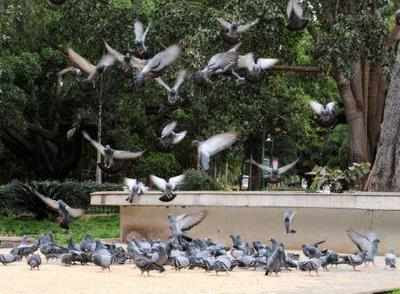 NEW DELHI: Feeding birds at traffic islands may be your way of seeking a staircase to heaven, but what you end up doing is ensuring the proliferation of blue rock pigeons to the detriment of other species, once common such as the house sparrow and the Brahminy mynah. To add to such worries of ornithologists, health experts also say that pigeon droppings and feathers are associated with respiratory disorders.

"There are a lot of foraging points across the city that are helping pigeons grow in numbers," said Faiyaz Khudsar, scientist in charge at the Yamuna Biodiversity Park. "They can feed on many types of grain and are very flexible about nesting. They also congregate in many areas, which means there is less space available for sparrows or smaller birds to nest in."

Khudsar added that people should realise feeding pigeons does not guarantee them a spot in heaven, but actually leaves them at risk of respiratory disorders. "People regularly present in areas where pigeons feed can contract diseases through their droppings and feathers," he said. Studies have that found bird droppings and feathers can lead to diseases such as histoplasmosis, candidiasis and cryptococcosis, which can be fatal in some cases. The birds are also carriers of ectoparasites, including bed bugs and yellow mealworms.

Pigeons are considered an invasive species. They are quick breeders, hatching chicks up to six times a year. Zoologist Surya Prakash feels "human interference" has added to the problem of proliferation. "Not only are birds very adaptable, but they need to find food. The fact that humans are providing the pigeons food is disturbing the natural balance," said Dr Prakash.

The increase in pigeons has seen an accompanying depletion in sparrow populations. Birder Nikhil Devasar feels the pigeon's capacity to adapt has allowed it to nest and breed in spaces where other birds cannot. "Be it under a window AC, in crevices or on shelves, pigeons can nest anywhere," Devasar pointed out. "Therefore, they have easily taken over spaces where once only sparrows could be found. Naturally sparrows are now rare in urban areas."

Agreeing that pigeons, more than the sparrows, have been able to adapt to changes in urban conditions, Neeraj Khera, senior advisor at GIZ, a sustainable development service provider, said this ecological balance was clearly a sign that the pigeon population had to be controlled.


4 Diseases You Can Catch From Pigeons | Medicine Report

medicinereport.com/article/4-diseases-you-can-catch-from-pigeons
Apr 25, 2011 - I understand why people might like pigeons and want to feed them. ... These variable diseases can cause anything from temporary illness to ...The primary means of transmission is through the droppings. The infected pigeon's droppings have the infection vector in them (be it a virus or a bacteria). When these droppings dry, they become powdered and float up into the air as dust, kicked up by passing feet. You inhale the pigeon dropping dust and bingo: pigeon disease.

1. Cryptococcal Meningitis
I was reminded of my former pigeon disease tracking hobby when I read this heartbreaking article in the Canadian newspaper The Globe and Mail, about a woman who contracted an extremely virulent and dangerous form of pigeon-borne meningitis.

She came down with a terrible migraine, then she was hospitalized, fell into a coma for several days, and woke up blind. Richards was lucky to be 23, young and strong and fit. Anyone in lesser health would likely have died.

2. Salmonella and Listeria
We think of these as being food-borne illnesses. But the salmonella and listeria bacteria are also carried by pigeons. These diseases are no joke: listeria is particularly dangerous for pregnant women and babies, as it can cause "meningitis in newborns, abortions, premature delivery, stillbirths, and death."

3. Viral Encephalitis
Pigeons are one of the primary reservoirs of West Nile virus, Western Equine Encephalomyelitis, and St. Louis Encephalitis. These variable diseases can cause anything from temporary illness to permanent nervous system damage or death. They are particularly dangerous to children and the elderly, where they frequently prove fatal.

The transmission vector in the case of these diseases is the mosquito. A mosquito bites an infected bird, then bites a person. As it bites, it backwashes the infected bird's blood into your blood stream. Mosquitoes definitely deserve a whole 'nother level of loathing, as mosquito-borne diseases account for a staggering number of human deaths worldwide.

4. E. Coli
If you are worried about e. coli infections from under-cooked meat, you should also be washing your hands whenever you spend time in a pigeon-rich environment.

Pigeons are extremely effective transmitters of e. coli to humans. It's impossible to say how many e. coli infections in city-dwellers actually stem from accidental contact with pigeon droppings. How many people have written off the last restaurant they ate at, when a pigeon was the real culprit?

Birds and their droppings can carry over 60 diseases - Medical News ...

www.medicalnewstoday.com/releases/61646.php
Rating: 4.1 - ‎37 votes
Sep 22, 2014 - Examples of transmissible bird diseases associated with pigeons, geese, starling and house sparrows: Histoplasmosis is a respiratory disease that may be fatal. Candidiasis is a yeast or fungus infection spread by pigeons. Cryptococcosis is caused by yeast found in the intestinal tract of pigeons and starlings.================================

Birds and their droppings can carry over 60 diseases - Medical News ...