Coastal Road extension up to NH 8 gets govt nod.

Roundtable on the coastal road: Road to ruin? or progress for Mumbai?

Coastal Road extension up to NH 8 gets govt nod

The project, that had Kandivali as its proposed end point, now has approvalto be stretched up to Mira Road and beyond

he city’s Coastal Road project just got more ambitious. The government on Monday approved a significant extension to the 32-km Coastal Road project up to NH 8 connecting Mumbai to Ahmedabad.
The project that has Kandivali as its proposed end point now has approval to be stretched up to Mira Road and further on to NH 8. 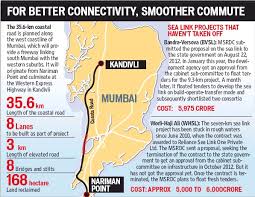 Hussain Indorewala, urban planner and assistant professor with Kamla Raheja Vidyanidhi Institute of Architecture said, “We are spending crores of rupees on a project that will cater to only 2% or 3% of the population. We have well-established public transport, but we are moving away from it to promote personal transport.” Another major decision taken was to extend the alignment of the 16.8-km Eastern Freeway by up to three km.
The alignments were approved on Monday by the Empowered Committee on Mumbai Transformation headed by Chief Secretary Swadheen Kshatriya, and officials of the MMRDA and the BMC.
Officials of the Mumbai Metropolitan Region Development Authority (MMRDA) gave a presentation on extending the Eastern Freeway, acknowledging it was feasible to extend the freeway from its current land point at Yellow Gate Junction on Carnac Bunder, beyond General Post Office (GPO) and ending on Mint Road.
The MMRDA was assigned the task of studying the feasibility of having an elevated rail corridor along with an elevated freeway, and find out if both could be accommodated over P D’mello Road. The authority in its report concluded that both projects were possible on the stretch provided land could be acquired from the Mumbai Port Trust (MbPT).
Currently, the controlled-access highway connects Express Highway at Ghatkopar to P D’Mello Road in South Mumbai. “We have approved the MMRDA feasibility study and directed the MbPT to take up the proposal to extend freeway at its next board meeting. A presentation to the honourable Chief Minister, who heads the Urban Development Department, will be given next month for the final nod,” Mr Kshatriya told The Hindu .
“We feel that the advantage acquired by the commuters while travelling on the freeway is lost at the landing point and bottlenecks on Carnac Bunder Junction.”
A presentation on extending the proposed Coastal Road alignment was given by Municipal Commissioner Ajoy Mehta, proposing to extend the project up to Mira Road and beyond towards NH 8.
The ambitious coastal road project is estimated to cost Rs 12,000 crore, and proposes to connect Nariman Point in South Mumbai to far north Malad and Kandivali. The BMC has proposed a 10-km underground tunnel at two locations starting from Nariman Point to Priyadarshani Park and from Juhu to Versova. The road will include 22 interchanges, entry and exit points, and lanes dedicated to the BRTS.
Chief Minister Devendra Fadnavis has already said development and extension of the integrated corridors in Mumbai is necessary by 2019, while obtaining clearance for the 22-km MTHL, which will connect Sewri in South Mumbai to Nhava in Navi Mumbai.
“The tenders for MTHL will be issued by March and the government wants to extend the proposed existing freeways. Eventually, all these have to be integrated for a long-term solution,” said a senior official.
We have approved the MMRDA feasibility study and directed the MbPT to take up the proposal to extend the freeway at its next board meeting
Swadheen Kshatriya
COMMENT:-
INSTEAD OF IT BECOMING MUMBAI COASTAL ROAD FOR CARS AND LIGHT VEHICLES ;
IT WILL BECOME A NEW EXTENSION OF NH8 FROM AHMADABAD TO MUMBAI WITH LOT OF TRUCKS AND COMMERCIAL TRAFFIC;THROUGH MIRA ROAD TO JUHU BEACH TO MUMBAI ISLAND CITY ;OR ALL COMMERCIAL TRAFFIC HAS TO BE BANNED,FROM MIRA ROAD TO JUHU BEACH ROAD
WHEN MUMBAI Business ITSELF  IS SLOWLY MOVING NORTHWARDS  FROM ISLAND CITY TO BANDRA- ANDHERI- MALAD AREA,
IN ANOTHER 10 OR 20 YEARS THIS ROAD MAY NOT BE NEEDED BEYOND KANDIVLI

timesofindia.indiatimes.com › City
Oct 7, 2014 - MUMBAI: After residing in Nariman Point's Express Towers for over ... marking another milestone in the steady movement of businesses to the suburbs. ... It will occupy floors 16, 17, 18 and 19 of the building once it moves in next year. ... for a gun and bomb assault in the centre of Jakarta earlier in the day ...