Mumbai Vaults/tunnels/bunker after Indian  revolt 1857-made by scared British=CST;governors bungalow;post office.ward no5 st george hospital ...
Cash vault at CST to be thrown open to public

By Kamal Mishra, Mumbai Mirror | Updated: Jun 3, 2017, 03.10 AM IST
The Central Railway will expand the heritage gallery at CST and make the vault a part of it.

The veil of mystery over a British underground cash vault at Chhatrapati Shivaji Terminus is likely to be lifted soon, and heritage lovers will be able to access the strong room that used to stash away all the daily collections a century ago.

The Central Railway has decided to not only make the secret cash vault at CST a part of the heritage museum, but throw it open to the public.

“We are going to expand the heritage gallery of CST and the cash vault will also be part of this gallery in future,” DK Sharma, General Manager, Central Railway told Mumbai Mirror on Friday.

Asked when heritage lovers can access the vault, Sharma said the process of expanding the heritage gallery is ongoing, and within a year the entire project would be completed.

The Central Railway has decided to shift the cash office for the expansion of the heritage gallery.

The cash vault is tucked away in a corridor that houses the heritage gallery and is hardly noticed in the hustle bustle of CST station.

According to officials, the cash vault began to be used for storing cash and key documents under tight security somewhere before 1890, and the system continued for nearly 100 years. Daily cash collections from Central Railway’s reservation counters and stations were transported here before being despatched to the bank the following day.

The vault has over 44 strongboxes and these coffers were moved into the basement through a pulley-driven lift, which were pulled by two employees. Around 15 years ago, the Central Railway stopped the practice of collecting cash in the vault overnight, and started sending the daily collection straight to the bank.

The Governor, who visited the bunker along with his wife and Chief Minister Devendra Fadnavis Tuesday, has decided to consult experts from various fields regarding its preservation. Maharashtra Governor Ch Vidyasagar Rao inspecting the tunnel along with Chief Minister Devendra Fadnavis at Raj Bhavan. (Source: Twitter/Devendra Fadnavis)Maharashtra Governor Ch Vidyasagar Rao has discovered a 150-metre long underground British era bunker inside the Raj Bhavan complex at Malabar Hill. Officials from Raj Bhavan said the bunker had been closed for several decades. The Governor, who visited the bunker along with his wife and Chief Minister Devendra Fadnavis Tuesday, has decided to consult experts from various fields regarding its preservation.
The bunker, spread over an area of more than 5,000 sqft, has rooms bearing the names Shell Store, Gun Shell, Cartridge Store, Shell Lift, Pump, Workshop, etc. There are also scores of lamp recesses in the gangway of the bunker, said an official.
“About three months ago, when the Governor was informed by old timers that a tunnel exists inside Raj Bhavan, the Governor asked to have it opened,” said an official. Public Works Department staff were surprised after they broke open a temporary wall that closed the entrance to the bunker on the eastern side. “Instead of an underground tunnel, an entire barrack with 13 rooms of different sizes was found. The bunker opens with a 20-ft tall gate and a ramp on the western side. There are long passages and small-to-medium rooms on either side,” explained the official.
“Even though the bunker was apparently closed after Independence, it was found to be surprisingly intact. Interestingly, the entire underground bunker has a drainage system and inlets for fresh air and light,” added the official.

Chief Minister Devendra Fadnavis visited the Bunker late in the evening Tuesday. He later tweeted pictures of his visit and described the tunnel as an “amazing discovery” by the governor. 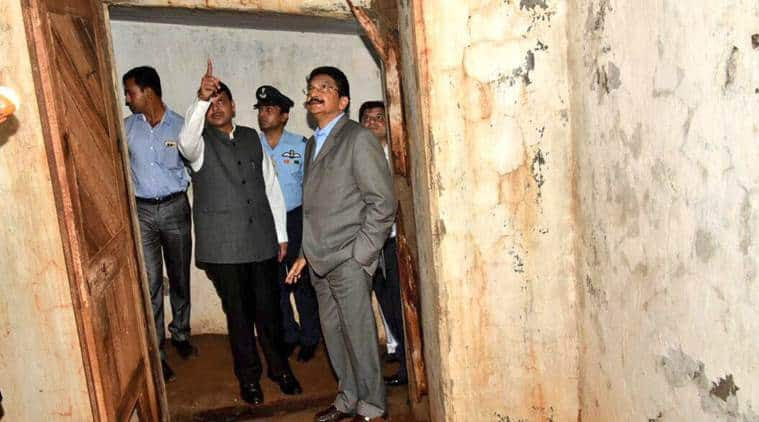 Historians say such bunkers are well known in military history. “It is good that the present Governor is taking interest in history. Such bunkers used to be an escape routes for the then Britishers to hide in an emergency. Also, a tunnel has been found below the government post office in Fort. So, it was common in those era,” said Deepak Rao, a historian.


Tunnel below GPO is a 100-yr-old water harvesting system

Posted On Thursday, June 14, 2012 at 11:31:56 AM
Team from ASI and Pune institute discovers that ducts below the heritage monument lead to a reservoir; GPO plans to revive it

A water duct at the General Post Office (GPO) building, thought until now to be a storm water disposal unit, is actually a rain water harvesting unit. And the system, if the GPO has it way, will be restored to it original function by next year.The ducts at the nearly century-old structure were discovered below the garden in 2010. However, their true function was discovered post a joint study by the Archaeological Survey of India (ASI) and Pune’s Deccan College Post Graduate and Research Institute, which is the largest institute on heritage archaelogy in Asia.The team from ASI - Nilesh Jadhav and Mayur Thakare - worked along with Vasant Shinde, the joint director of the Pune institute. The discovery was made on Wednesday and the team will file a detailed report soon.Speaking about GPO’s rain-water harvesting system Shinde said, “There is one reservoir with four ducts. Its dimensions are 50x50m and the depth is about 7 feet. There is a 5ft accumulation of silt in the structure which made me deduce that it had earlier been used as a rain water harvesting unit.”Shinde added that a similar rain-water harvesting unit, which was over 3,500 years old, was discovered at Inamgaon in Pune district, close to Shirur.The team said that the Britishers constructed such rain-water harvesting units not only to make maximum use of rain but also to prevent flooding in low-lying areas.During the monsoon, Shinde added, when the reservoir fills up, excess water gets filtered out through outlets located on the walls. The structure is made of stone fitted in grooves to avoid any leakage, making it environment-friendly.Director of Postal Services, (HQ) Abha Singh said, “We have asked for an estimate of the cost needed to revive the unit. We have to send it to our Delhi office for approval. We hope that the inauguration of the revived model will coincide with our centenary celebration next year. We also plan to release a commemorative stamp of GPO along with this revived model depending on approvals.”Shinde added that he believes that such water harvesting units exist underneath all the heritage structures in the vicinity, including the Chhatrapati Shivaji Terminus (CST)The PRO of Central Railways A K Singh said the Railways would be very interested in exploring the possibility. “Currently we use 19 lakh litres of potable water daily, of which one lakh is recycled and used to clean compartments and rakes. Such a harvesting method, if successfully adopted, could benefit us greatly.”

Mirror reporters discovery of  18th century tunnel from St George’s Hospital that has exits at Gateway, Churchgate and Blue Gate

Two Mumbai Mirror reporters on Thursday discovered an over 240-year-old tunnel tucked under the St George’s Hospital.
The 1.5 km tunnel, now full of muck and sea water, starts under Ward 5 of the hospital and has exits at the Gateway, the Blue Gate and Churchgate.


With its lone entrance, covered by a wooden hatch now, plonked right in the middle of the Swine Flu ward, the tunnel for many years has been a source of great curiosity and many unfounded stories in the hospital.
The wooden hatch was raised and a ladder lowered into the tunnel to let the two reporters explore its depths. But they found that they could not go beyond a few metres.
The tunnel’s three arms lay blocked with brick-and-mud walls. There was knee deep water in the tunnel and hospital staff said the level would rise as monsoon progresses.
Historians say since the Dutch, the French and the Portuguese posed a constant threat, the Britishers built a network of tunnels starting from St George’s Fort, present day’s St George’s Hospital.
Urban historian Sharada Dwivedi said she had come across the St George’s Hospital tunnel during her research on Mumbai’s past. “There are many tunnels from the British period which run through the Fort area.

There are many tunnels from the British period which run through the Fort area.
The St George’s hospital tunnel may be connected to Apollo Bunder (Gateway of India), Churchgate and Blue Gate. These secret passageways tell us a lot about our past and they need to be protected and preserved,” she said.
The tunnel has tiny skylights that also let some fresh air in, not enough though. The tunnel smells of rotten flesh, enough to make anybody sick in a matter of minutes.
Former superintendent of St George’s Hospital, Dr K N Varade, said he got the tunnel door opened once during his tenure.
“The wooden plank covering the tunnel’s opening was damaged. I got it fixed. We did not talk about the tunnel because we didn’t want the Archaeological Survey of India to step in and take over this part of the hospital,” he said.

https://en.wikipedia.org/wiki/Line_3_(Mumbai_Metro)
Line 3 of the Mumbai Metro, also referred to as the Colaba–Bandra-SEEPZ line, is a part of the metro system for the city of Mumbai, India of which construction has been initiated. When completed, the 33.5-km long line will be the first underground metro line in Mumbai.
Line length‎: ‎33.05 km (20.54 mi)
Planned opening‎: ‎2020
Stations‎: ‎27
Status‎: ‎Under construction