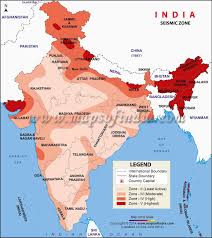 BMC-IIT study: A fault line at Panvel, 18 km to Mumbai’s east, is still active and this poses the threat to areas nearby IIT Bombay and civic agency’s study will help disaster management planning in Mumbai.(HT File Photo)
The risk of an earthquake striking is greater in Mumbai’s eastern localities such as Shivaji Nagar, Govandi, Ghatkopar, Bhandup, Powai, Vikhroli, Vidyavihar and Mulund. This is because a fault line or fracture in the earth’s crust, which ups the chances of an earthquake, runs from Panvel, 18 km to the city’s east, all the way north to Koparkhairne and Bhiwandi.
These areas were identified after a study by a team from the Indian Institute of Technology-Bombay (IIT-B) showed that the fault line in Panvel is still active. As part of the study, the IIT-B team of two professors and two students measured the potential impact of an earthquake measuring 6.5 on the Richter scale on the city.
They found that Mumbai’s east, which is closer to Panvel, is more likely to be affected than the west and the island city.
“As the Panvel fault is still very prominent, its effect on the city cannot be ruled out. For an effective disaster management plan for the city, detailed information is key,” said Ravi Sinha, professor of civil engineering at IIT-B, who was part of the study.
The study also found that in 1618, close to 20,000 people lost their lives after an earthquake struck Mumbai, which at the time had a population of just 2 lakh.
Sinha said the longer the gap between two earthquakes, the higher will be the impact.
The study spanning two years was commissioned by the Brihanmumbai Municipal Corporation, which spent Rs23 lakh on the first-of-its-kind initiative so as to put in place a disaster management plan for these areas.
The BMC has divided the city into 7,700 grids of 250 sqm each. These grids have been overlaid on a Mumbai map that has details of hospitals, open plots, schools and shelters in every locality.
This will help the disaster management department during rescue operations (see box).
“We are working to modernise the entire disaster response system so that we can improve our response time and the quality of response when an emergency hits,” civic chief Ajoy Mehta told HT.
The department is also creating a detailed response plan in which it will list the number of beds in every hospital, the facilities available at police stations, fire stations and government offices, among others, to ensure minimum damage and loss of life during an earthquake.


Oct 9, 2005 - MUMBAI: While areas in the Himalayan belt are more likely to experience major earthquakes as they lie in seismic zone 5, the country's financial capital lies in the moderate seismic zone 3 which can experience quakes up to 6.5 on the Richter scale.

04 December 1832 - Ajgaon-Terekhol area, Maharashtra.
15.800 N, 73.700 E (8)
Maximum observed intensity VI (8). This earthquake is the largest event known near the state of Goa. No moderate or major earthquakes have been recorded in Goa.

10 December 1967 - Koyna area, Maharashtra, Mw 6.5 (2).
17.450 N, 73.850 E, D=027.0 kms, OT=06:48:25 UTC (2)
200 people were killed and many villages in the Koynanagar area were severely affected. The Koyna Dam suffered some structural damage and leaks were observed in the face of the dam. Tremors were felt strongly in many towns and cities in western Maharashtra, including, Mumbai and Pune. Also felt in Goa and other parts of western and southern India.

24 August 1993 - Arabian Sea, Mb 4.9 (2).
20.700 E, 71.440 E, D=029.0 kms, OT=17:47:30 UTC (2)
This event was located in the Gulf of Khambat, to the west of Surat, Gujarat. This earthquake was felt widely in south-eastern Gujarat and parts of coastal Maharashtra. In Gujarat, people rushed out into the open at Ankleshwar, Bardoli, Bharuch and Bulsar. It was felt strongly (MM V) at Rajula. It was also felt (MM IV) at Amreli, Bhavnagar and Surat. In Maharashtra, it was felt (MM III) in Mumbai. Reports of tremors were received from Bandra, Chembur, Juhu, Kandivili and Prabhadevi. The shock was perceived over an area with a radius of 250 kilometres.

30 September 1993 - Killari area, Maharashtra, Mw 6.2 (10)
18.090 N, 76.470 E, OT=22:25:50 UTC (2)
Among the deadliest intraplate earthquakes on record. Close to 8,000 people were killed and thousands injured in the pre-dawn earthquake. Many villages in the epicentral area, around Killari were razed to the ground. 55 people were killed in the neighbouring state of Karnataka, in Gulbarga district. Strong tremors were experienced at Hyderabad, Pune and Mumbai and across much of Maharashtra, Karnataka, Andhra Pradesh and Goa. Tremors were felt as far as Chennai.

31 May 1998 - Koparpada-Naude area, Maharashtra, ML 3.6
19.040 N, 73.110 E, OT=13:29 UTC (4)
This earthquake was the first instrumented event in this general area. Tremors were felt in Thane (MM IV-V) and at Dombivili, Kalyan, Kulgaon and Mumbra. Mild tremors (MM III-IV) were experienced in Mumbai at Borivali, Chembur, Dahisar, Juhu, Malad, Mira Road, Santa Cruz and Wadala as well as in south Mumbai.

31 March 2007 - Nanded region, Maharashtra
An earthquake swarm accompanied by loud explosion-like reports began to be felt in the town of Nanded and the adjoining areas on 31 March 2007 local time. Minor damage and a few injuries were reported as a result of the tremors in Nanded.

6 June 2007 - Katraj-Khadakwasla region, Pune, Maharashtra, M2.6
OT=07:48 UTC
A mild earthquake was felt in the Pune metropolitan area in Maharashtra, on 6 June 2007 at 13:18 PM local time. The earthquake had a magnitude of M?=2.6 and was felt in parts of the Pune metropolitan area. Officials at the Meteorological Department also suggested the possibility that this might have been the result of underground tunneling work that is underway in the apparent epicentral region and not of seismic origin.


Maximum observed intensity IV (1). This region lies to the east of Mumbai and to the south-east of Kalyan. It is the earliest reported earthquake from this region. 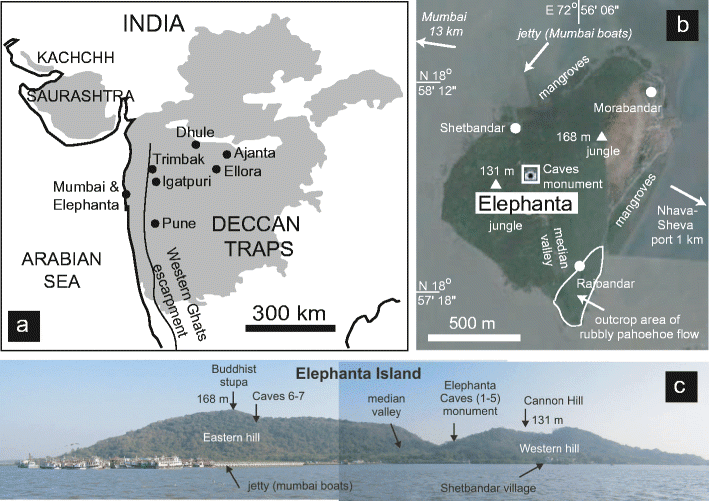 Lava Channel of Khedrai Dam, Northeast of Nasik in Western Deccan Volcanic ... lava tubes and extensive flow field during the 1991993 eruption of Mount Etna.
It is interesting to note that most of the rock cut caves reported from Maharashtra, in Deccan Volcanic Province are from pāhoehoe flows. ... Lava caves are known to have served as homes and temporary shelters throughout history and are significant archaeological sites.


A lava channel is a stream of fluid lava contained within marginal zones of static (i.e., solid and stationary) lava or lava levees. The initial channel may not .

The genesis of a lava cave in the Deccan ... - Scholar Commons


The volcanic geoheritage of the Elephanta Caves, Deccan Traps ...


India cut caves in Deccan basalt on the island of Elephanta, in the Mumbai ... and or the history of science, or can be used for research, teaching, squeeze-ups, ... 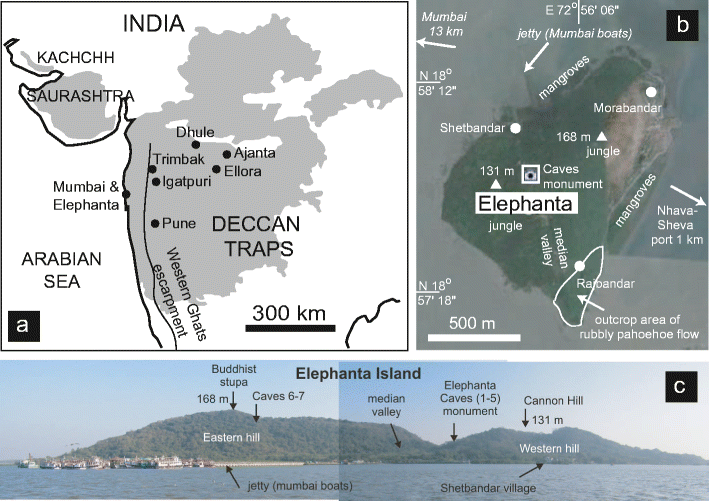 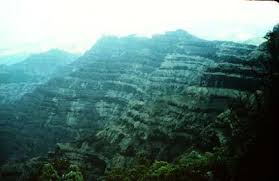 Jump to History - History. The Deccan Traps began forming 66.25 million years ago, at the end of the Cretaceous period. The bulk of the volcanic eruption occurred at the Western Ghats some 66 million years ago. This series of eruptions may have lasted less than 30,000 years in total. 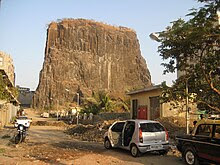 ,Gilbert Hill-Andheri west:-http://oldphotosbombay.blogspot.in/2012/06/gilbert-hill-andheri-west.html
Gilbert Hill is a 60 m (197 ft) monolith column of black basalt rock in Andheri, inMumbai, India. The rock has a sheer vertical face and was formed when molten lava was squeezed out of the Earth's clefts during the Mesozoic Era about 65 million years ago. During that era, molten lava had spread around most of the Indian states of Maharashtra,Gujarat and Madhya Pradesh, covering an area of 50,000 square kilometres (19,000 sq mi). The volcanic eruptions were also responsible for the destruction of plant and animal life during that era.